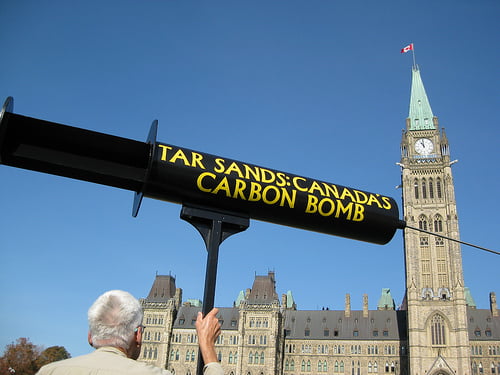 Canada is lobbying to make oil sands – an energy extraction method that is far more polluting than conventional techniques – accessible to Europe. But according to a leading scientist, this would mean “game over” for the climate.

Professor James Hansen, who recently stepped down from his role at NASA, told The Guardian, “Oil from tar sands makes sense only for a small number of people who are making a lot of money from that product.

“We are getting close to the dangerous level of carbon in the atmosphere and if we add on to that unconventional fossil fuels, which have a tremendous amount of carbon, then the climate problem becomes unsolvable.”

In leaked documents seen by Greenpeace, the UK government has apparently rejected a European proposal to classify oil sands as “highly polluting” under the Fuel Quality Directive (FQD).

According to the UK Tar Sands Network, an anti-tar sands campaign group, the move favours dirty Canadian oil. However, Department of Transport minister Norman Baker said that Greenpeace is “wrong” and that nothing had been decided yet.

Meanwhile, the tar sands industry has increased its efforts to lobby in favour of European imports. The Canadian government itself has doubled its advertising spend on tar sands and natural resources minister Joe Oliver has travelled to the UK to promote oil sands and campaign against the European FQD regulation.

Oil sands release carbon emissions that are 12% higher than conventional oil, because it needs more refinement and more intense energy is extracted and produced.

It is the fastest growing cause of greenhouse gases emissions in Canada and is one of the reasons why Canada’s climate policy performace is one of the worst in the western world.

In addition, tar sands operations have heavily damaged the territory of indigenous communities and led to high incidences of cancer among local people.

The Athabasca Chipewyan First Nation (ACFN), one of the communities affected by tar sands, is suing Shell for the violation of past agreements that have threatened the rights of communities.

Eriel Deranger, community member and spokesperson for ACFN, said, “We have tried exploring amenable agreements and options with Shell only to be disappointed by their inability to compromise and adjust proposed plans to adequately work with us which has led and continues to lead toward litigation.

“Our culture, lands and rights can no longer stand for unabated and irresponsible development of tar sands in the region by Shell or any operator.”

Are America’s Student Ways of Life Sustainable or Not?

Sustainable Wedding Planning is Easy With These Tips

Reasons Eco-Friendly Families Might Want to Move to Richmond Hill