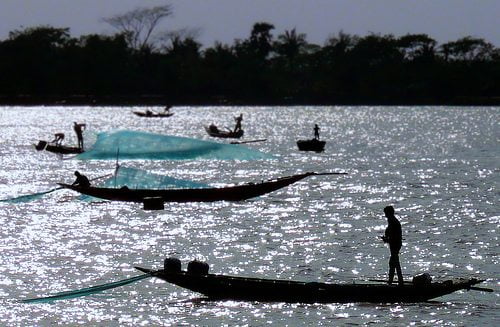 Leonardo DiCaprio has said his philanthropic foundation will be donating $7m (£4.1m) over the next two years to help overcome the “systematic devastation” of the world’s oceans and fisheries.

At an event in the US, the Hollywood star expressed concern about overfishing and the degradation of the Great Barrier Reef, and praised a recent move by Barack Obama to extend the size of a marine reserve in the Pacific Ocean.

DiCaprio introduced himself at the Our Ocean conference as a “concerned citizen of this planet who believes this is the most important issue of our time”.

He said, “Since my very first dive in the Great Barrier Reef in Australia 20 years ago, to the dive I got to do in the very same location just two years ago, I’ve witnessed environmental devastation first-hand.

“What once had looked like an endless underwater utopia is now riddled with bleached coral reefs and massive dead zones.

“We have systematically devastated our global fisheries with destructive practices like bottom-trawling”.

The actor added at the conference that he was pleased to hear President Obama had plans to increase the size of the protected Pacific Remote Islands Marine National Monument. If approved, the area would be the largest marine reserve in the world.

DiCaprio said, “It’s fantastic to start off the day by hearing President Obama commit to expanding marine reserves in US waters and taking serious steps to prevent illegally caught fish from entering the marketplace.”