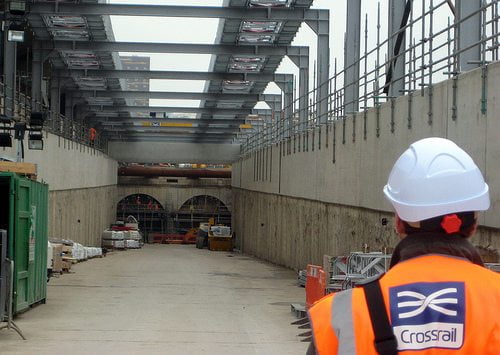 London’s £14.8 billion Crossrail project is leading the construction industry in sustainability, its bosses have said.

The rail line – the biggest construction project in Europe – is due to be finished in 2018 and will link Berkshire to Essex via Heathrow and central London. Its first stretch of tunnel was completed last week.

The project will require over 100km of tracks, including 42km of new tunnels, and will see new stations built across London, including Paddington, Canary Wharf and Liverpool Street. More than 10,000 people are currently employed across its construction sites.

Saying that they have learnt from criticisms of the 2012 Olympics development projects, developers claim that over 56% of diesel plant machinery used on Crossrail’s 45 worksites has been fitted with emission controlling to cut greenhouse gas emissions.

The construction sector is currently the only unregulated major source of emissions in the city.

“We are creating a new generation of construction workers and tunnellers with skills that will set them up for life; we are helping support business across the UK; and we are leading the industry on implementing environmental solutions to make for a greener construction sector.”

On Tuesday, Crossrail also delivered its one-millionth tonne of earth to Wallasea Island in Essex – with 3m still to go. Fifty-five million year old clay, which has been excavated to make way for tunnels and stations, will aid the development of a new nature reserve for migratory birds.

Boris Johnson, the mayor of London, has said that Crossrail will “revolutionise” rail travel in the capital.

It will provide the first a direct connection between all of London’s main business centres and, its organisers say, will cut journey times across the city.

As many as 24 trains per hour will operate between Paddington and Whitechapel during peak periods, with each train carrying up to 1,500 passengers. It has been estimated the development may add up to £42 billion to the economy.

On Monday, parliament began discussions on the controversial High Speed 2 project and its consequences on landscapes and communities. HS2 will connect London, Birmingham, Manchester, Leeds and the East Midlands.

Meanwhile in January, Network Rail announced an investment of £37.5 billion into Britain’s rail infrastructure, to be completed by 2018, and has pledged to build a railway that supports a greener environment – a railway “fit for the future”.

Under the plans, carbon emissions will be cut by 37% per passenger – the equivalent, Network Rail says, of taking one million lorries off of Britain’s roads.