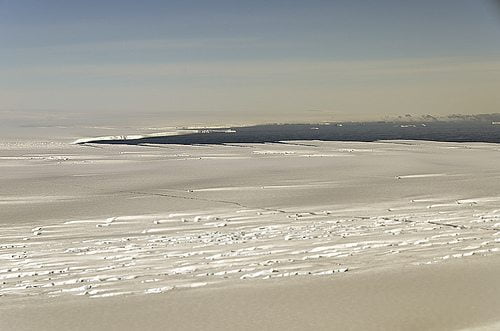 The rapidly melting Pine Island glacier in West Antarctica may be the biggest contributor to rising sea levels over the next few decades, a new study has suggested.

The research, published in the journal Science, found that the largest glacier in Antarctica may be recreating 8,000-year-old history. Scientists from the US, UK and Germany found that the glacier also thinned in the Early Holocene, in a melt that may have lasted for centuries.

The Pine Island glacier has currently been thinning for about 20 years, and the scientists say their findings show that this trend may continue for quite some time.

“Our results show that rapid thinning was sustained for at least 25 years, and most likely for much longer — possibly centuries”, study author Joanne Johnson, a geologist with the British Antarctic Survey told LiveScience.

“Our study shows that even a small kick to the system can result in a dramatic and long-lived response, so we have evidence that suggests we can expect the contemporary changes to carry on for several decades, or even centuries.”

Some studies have suggested that the its rapid disappearance is a result of manmade global warming, though this recent research indicates that naturally occurring processes are at least a factor.

Regardless of the cause, the findings are concerning news for residents of cities at risk of coastal flooding, such as London, New York and Mumbai.

“The amount of ice being lost from Pine Island glacier is equivalent to every person on our planet pouring 10 pints of water into the ocean every day”, Prof Andrew Shepherd of the University of Leeds, who was not involved in the study, told Reuters.

In July, an iceberg of 720 sq km in size broke off from the Pine Island glacier.