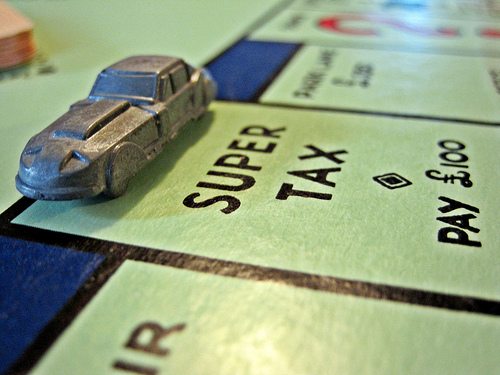 In an article subheaded, “Complexity in taxation puts employers off employing and conceals the truth about tax from those who pay it”, Amol Rajan makes the argument for simplifying the tax code. We’re going out on a liberal economics limb here; just remove taxes on work and enterprise. Our supposedly free market government resists a genuine shift to a sustainable and entrepreneurial economy.

We favour targeted taxes, simpler taxes, fewer taxes and lower taxes, once the national debt has been paid down. It is irresponsible and unethical to pass on such a vast mountain of debt to future generations.

Every tax on income, whether personal or corporate, reduces the incentive to work, employ people or invest. We side firmly with Adam Smith here, in that taxes should be imposed upon wealth and luxuries. Later we’ll side with that other free market thinker, Friedrich von Hayek, who argued that the market cannot deal with some eventualities.

Smith has four straightforward maxims which a good tax should conform to:

2. “The tax each individual is bound to pay ought to be certain, and not arbitrary. The time of payment, the manner of payment, and the quantity to be paid, ought all to be clear and plain to the contributor, and to ever other person.”

Arbitrary decisions by rulers has been a principle from Magna Carta ad nauseam, but ignored by governments who fiddle endlessly with the tax code, subsidies and benefits, while individuals, start-ups and small business drown under red tape and tax burden.

3. “Every tax ought to be levied at the time, or in the manner in which it is most likely to be convenient for the contributor to pay it.”

Convenient tax and greater flexibility for genuine wealth creators who are investing or when you die, for example, when you have no need for mortal assets.

4. “Every tax ought to be so contrived as both to take out and to keep out of the pockets of the people as little as possible, over and above what it brings into the public treasury of the State.”

Complex, multiple taxes simply do not do this and are a form of extortion racket by the state.

A true meritocracy depends on redistributive efforts to ensure that the most able rise according to their abilities, rather than those with the wealthiest parents. It is a mathematic certainty that wealth concentrates, due to the basic principles of compound interest, portfolio diversification and the cross-border mobility of cash.

But a tax on income, in all its forms, is nothing but a disincentive to work, employ more people or invest in growth. Imagine a life where every penny you earned was your own.

A tax on unearned income or wealth, e.g. property taxes (primarily land values and ground rent), capital gains and inheritance and so on, would turn empty properties into homes for the homeless, encourage those sitting in houses too large to take in lodgers or downsize, and prevent land banking without compulsory seizures. A home building boom would ensue, increasing supply to match demand and stabilise house prices.

Companies, as well as legal persons, are also wealthy. As legal persons, they should be treated as wealthy individuals. On tax, large companies that own vast property assets would be forced to compete with local retailers who don’t. An ‘equivalent land space’ value tax would also ensure online retailers don’t secure an unfair competitive advantage that destroys our high streets and local communities.

The other advantage of a land tax, is that it is unavoidable. You cannot move physical square feet offshore.

The other tax that Smith advocates is a tax on luxuries. While he recognised that a luxury’s definition what vary from time and place, ‘luxuries’ should be all those things that you don’t actually need to live. We need food, clothing and shelter. You should not be taxed for the minimum standards of living: eating, clothing or renting/buying a home (shelter). Capital gains and VAT on most things therefore remain, but the market-distorting stamp duty goes.

The one tax Smith has no time for at all is income taxes: “In all cases, a direct tax upon the wages of labour must, in the long run, occasion both a greater reduction in the rent of land, and a greater rise in the price of manufactured goods, than would have followed from a proper assessment of a sum equal to the produce of the tax, [levied] partly upon the rent of land, and partly upon consumable commodities.”

But tax should not be arbitrary, regressive or retrospective. People who have built up wealth under a previous system should not be hammered by this step-change of taxation. High net-worth and ultra-high net-worth individuals should be encouraged or incentivised to become more philanthropic, rather than simply passing on wealth to future generations or channelling it offshore.

To mitigate the impact on those individuals and companies who have saved long and hard to build up diversified property assets, we would recommend creating a new tax in the form of pollution or harm added tax.

The corporate polluter pays for a painful transition

Here we side with the other free market thinker, Friedrich von Hayek. He argued that the free market cannot effectively deal with externalities such as consumer and worker harm, pollution and deforestation (but let’s add the more modern polar melting to that). Prohibition, regulation or tax are the only ways to deal with market failure. We favour taxation over prohibition and the often ineffective regulation.

The minority personal choice to smoke and drink are part of mature free society but come with a heavy public health cost which the majority should not be forced to suffer or pay for. We advocate that the producer rather than addicted consumers should pay the full cost of the industry as this would encourage them to divest and seek less harmful, more productive activities for their capital. They’d certainly think twice before trying to recruit young people to consume their products to replace those who die prematurely.

We see no difference in products that harm individuals to those that harm society or the environment. Producing toxic chemicals in the form of greenhouse gases and other chemicals that are harmful to the environment and society but more specifically the elderly, the ill, children, wildlife, water tables and so on should all be taxed heavily.

Inevitably, as we move towards a more sustainable economy, pollution and harm taxes would fall, requiring a rise in property and luxury taxes. As this would be a gradual process, the disruption and movement of assets would be fair, gradual and manageable.

In a functioning democracy, the license to be rich requires legitimacy and responsibility

With wealth comes a responsibility to the society that has facilitated an accrual of wealth. It is fashionable to think that wealth creation is all down to an individual’s innate talents, but it is the vast majority of society adhering to a strong work ethic while earning enough to buy and consume, while at the same time paying for national security, domestic law and order, universal health, education, infrastructure and abiding by the rule or law, that has made anyone rich.

If a person puts that wealth to good use to create jobs, a more sustainable future, new disruptive industries or through philanthropy, then they should be praised and relatively free of tax. If they horde their wealth in unproductive, uneconomic assets, and pass it on to similarly hoarding heirs and heiresses, their wealth should be taxed to benefit the society that has facilitated such individual prosperity.

And here’s one other tax on market failure. A lot of wealth is now created though high speed casino speculation on financial markets, with no tangible benefit to society. A tiny Tobin-like tax on every transaction might put enough grit in the system to slow that speculation down and, if not, yield a huge bounty for the treasury, mitigating other taxes.

We remain confident that these ideas will never be adopted as those who are most forceful in advocating a free market system are least willing to implement the balancing elements of their ideology, namely wealth taxes, taxes on luxuries and taxes that deal with market failures.

Some free market ideologues want all the gains of Smith and Hayek’s economic thinking with none of the balancing pain – creating systemic volatility, uncertainty, complexity and ambiguity. Neither Smith nor Hayek argued for unfettered markets. It is a tragedy that those who freely use their names have neither bothered to read their great works nor even remotely understood them.