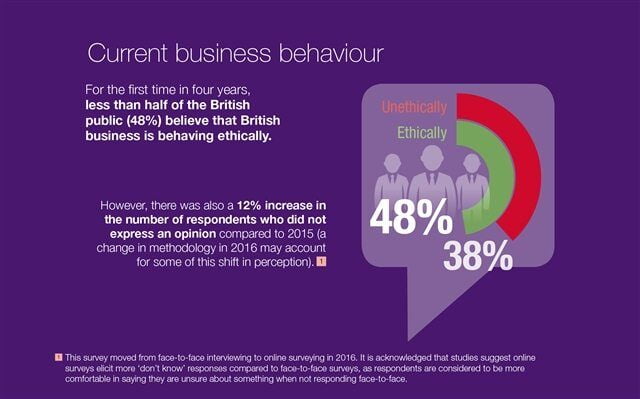 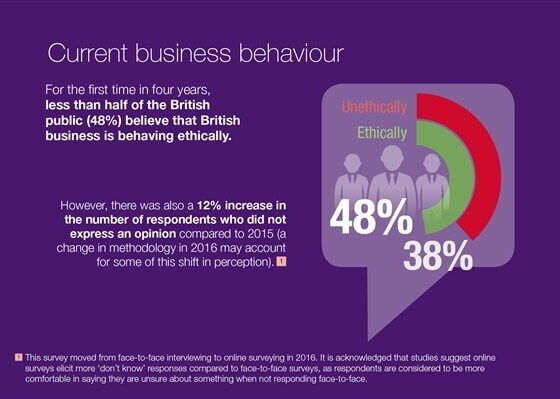 Survey Reveals What The British Public Think Of Business Behaviour

According to the latest survey conducted for the Institute of Business Ethics, the British public’s opinion of business behaviour has fallen dramatically.

The survey was published today, and shows that for the first time in four years, the public’s general opinion about ethical business behaviour has fallen. Only 48% of those surveyed said they think British businesses behave ethically.

Since the survey began in 2003, the British public’s opinion has consistently leant more towards judging business as behaving ‘ethically’ than ‘not ethically’. However, in 2016, public opinion has fallen significantly, down 11 percentage points compared to 2015. It is now back to 2012 levels, just a percentage point higher than when the survey began, with less than half (48%) believing that business behaves ethically.

Philippa Foster Back CBE, IBE’s Director, said: “This result should serve as a wake-up call to British business that it must do more to restore public trust. The fact that the number of those who are concerned about corporate tax avoidance has increased and remains the top public concern is an example where business is not doing enough to address ethical issues.”

The top 3 issues that the public think business needs to address remain unchanged for a third consecutive year.

Tax avoidance has been one of the top two issues since it was first introduced in the survey in 2012, with 43% considering this an issue that needs to be addressed, a rise of 9% from last year (34%).

Philippa Foster Back CBE said: “Tax is a difficult and complex issue, but it isn’t going away. Companies need to do more to address public concern or risk losing even more public trust. Internal engagement is needed around the decisions and circumstances behind the tax positions companies decide to take, and then communicated externally, as will become the case under HMRC proposals.”

Executive pay continues to be an issue, with 28% of the public thinking this still needs to be addressed (up from 25% last year).

Philippa Foster Back CBE commented: “It is disappointing that, despite some high profile positive cases, business is not doing enough to change public opinion on this issue. While the workforce and the country are being asked to tighten their belts, the disregard of the public’s opinion on this issue continues to harm corporate reputation of self-interest.”

Exploitative labour continues to rise as a concern. The introduction of the Modern Slavery Act last year has raised awareness of this as a corporate issue.

Work-home balance for employees enters the top 5 for the first time since being introduced 11 years ago, with 21% raising this as an issue of concern.

Philippa Foster Back CBE said: “As technology blurs the lines between work and home life, we are seeing this becoming more of an issue. This, coupled with the financial pressures which a post-Brexit economy is putting on employees and employers alike, means this issue needs to be addressed before we reach burn-out.”

Protection of customer data/data privacy (introduced in 2015) also becomes a top 5 issue of concern for the first time, with 16% citing this as a problem. Philippa Foster Back CBE said: “Addicted as we are to our smart phones and social media, consumers are becoming more aware of how vulnerable their personal data is, and are looking to business to protect and reassure them. Business needs to address this as a matter of urgency, as we see this as being potentially the biggest threat to corporate reputation in the coming years.”