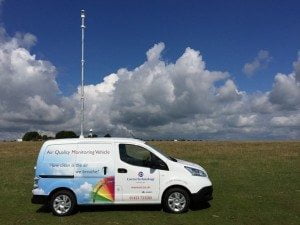 Drivers and their passengers may be exposed to more harmful pollution inside a vehicle than on the road outside, suggests a pilot study launched today, carried out using the capabilities of a unique mobile air quality laboratory carried in an all-electric, no-emissions van.

On a journey from Reading to central London the new Air Quality Monitoring Vehicle –  nicknamed the smogmobile – sampled air inside and outside the vehicle every minute and found that levels of nitrogen dioxide (NO2) were on average 21% higher inside with the windows shut than on the road outside.

Dr Ben Barratt, Lecturer in Air Quality Science at King’s College London, said: “This illustrative study adds to mounting evidence that vehicles provide little protection from harmful traffic pollution, and drivers and their passengers may even be exposed to higher levels than on the road outside.

“These initial findings highlight the urgent need for further investigation into the health risks faced by motorists and their passengers. It is especially important to understand the impacts of air pollution on professional motorists such as taxi and lorry drivers, who spend many hours behind the wheel each day.”

Recent research has highlighted the damaging impact of NO2, which causes 23,500 deaths a year in the UK, and all but five of 43 regions in the UK breach EU safety limits. Nearly 29,000 additional deaths a year are caused by particulates, fine particles which can lodge in the lungs. Diesel exhaust is the main cause of both pollutants which can aggravate heart and lung conditions and breathing problems.

Duncan Mounsor, Managing Director of Enviro Technology Services, which developed the mobile lab, said: “Air pollution causes more than 50,000 deaths a year in the UK and costs the economy billions. We have developed the Air Quality Monitoring Vehicle to give local authorities and researchers a powerful new tool to plan action to clean up our air and tackle one of our greatest public health challenges.”

The Air Quality Monitoring Vehicle offers a unique combination of features. The battery-powered mobile lab is carried in an all-electric van, so it can measure pollutants and greenhouse gases on the move without contributing any emissions itself. It gathers air quality data in real time, both inside and outside the vehicle, plotting it against GPS coordinates.

It carries state-of-the-art instruments, several of which are more sensitive, more accurate and faster than the UK’s national air quality monitoring network. These include equipment which can make highly accurate, direct measurements of NO2, in contrast to traditional instruments used by the UK’s static air quality monitoring network, which measure NO2 indirectly and are unsuited to fast-changing environments.

“The availability of Enviro Technology Services’ new Air Quality Monitoring Vehicle is an important step forward for the UK.  Although London and the UK have extensive fixed site air quality monitoring sites the deployment of a mobile unit will provide instantaneous, onsite data directly relating to a multitude of air quality issues. A priority for the use of this mobile unit must be a more proactive approach to improving air quality by ensuring compliance with ambient air quality standards.”

The Air Quality Monitoring Vehicle conducted a pilot NO2 study on a two-hour journey from Reading along the M4 and through central London to Waterloo Bridge using its new capabilities. It found that the driver and passenger were consistently exposed to levels of NO2 the same as or higher than those on the road outside. Mean average concentrations of NO2 outside the vehicle were 66 µg m3 (micrograms per cubic metre) but 21% higher inside the vehicle at 80 µg m3.

The Air Quality Monitoring Vehicle also found levels of NO2 inside the vehicle reaching up to 350µg m3 for brief periods in central London. The EU sets an hourly safety limit of 200 µg m3 and an annual limit of 40 µg m3.

Dr Barratt said: “The Air Quality Monitoring Vehicle is a valuable tool for studying the health risks faced by drivers and their passengers and strategies for reducing risk, for example, by testing the effectiveness of different air filters. Up to now we’ve had to carry out research using instruments temporarily fixed to a vehicle. This is a permanent solution carrying robust, high-quality instrumentation, allowing studies to be revisited over time.

“The public health message is, you can’t hide from air pollution inside a car. Many people think that if you cycle or walk you are exposed to more air pollution, but levels are significantly lower at the side of a road than in traffic.

“We advise the public to leave the car at home whenever possible. It exposes you and your family to lower levels of air pollution, you’re not contributing to the problem, and you’re also getting the benefits of exercise. That’s tackling three of our biggest public health challenges in one go: air quality, climate change and obesity.”

Many motorists have the option to walk, cycle or use public transport. On average primary school children live 1.8 miles from school, a 25-minute walk or 15-minute bike ride, yet 44% are driven to school. Nationally, 16.7 million people commute to work by car, including 67% in urban areas outside London and 30% in London. 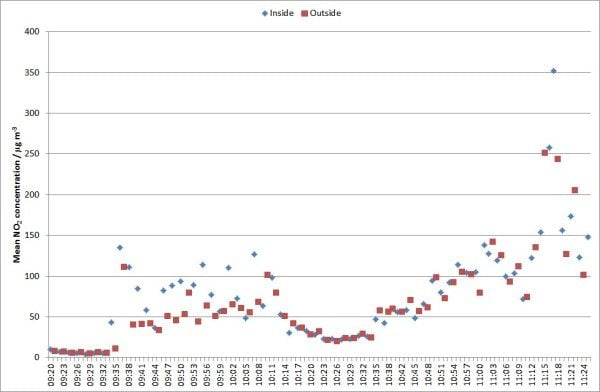 The Air Quality Monitoring Vehicle can measure the pollutants with the greatest impact on health, NO2, particulates (PM2.5 and PM10) and ozone, and the most important greenhouse gases, carbon dioxide and methane. It can be hired for short-term surveys to investigate a range of air quality issues at precise locations in real time. Other potential applications include:

– Measuring air quality at both head height and pushchair height, where concentrations of pollutants can be higher.

– Monitoring the boundaries of landfill, fracking and other industrial sites to identify leakages of methane, a greenhouse gas which causes 86 times more warming than CO2 over 20 years.

It offers a cost-effective tool for local authorities, which are required to draw up plans to manage air pollution, as well as consultants and air quality researchers. They have largely had to rely on data from expensive static monitoring stations and on monthly data from diffusion tubes, which can only be used once.

All but five of the 43 regions in the UK have breached EU safety limits for NO2 for five years, and in April 2015 the Supreme Court ordered the government to publish a clean-up plan, in a case brought by environmental lawyers ClientEarth. The government published an air quality action plan in December 2015 to bring every region into line by 2020 except London which has a 2025 target. ClientEarth has said it will take the government back to court because the plans do not go far enough.

The main means of monitoring the UK’s air quality is a network of 133 static monitoring stations. Computer models use data from these fixed sites to estimate pollution levels across the whole country and along the busiest roads. However, these monitoring stations are large and expensive. A basic monitoring station measuring NO2 and particulates can cost £35,000 and is too large to install on many city streets.