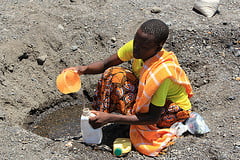 A new report from the Organisation for Economic Co-operation and Development (OECD) delivers startling numbers and a stark warning to governments neglectful of long-term environmental targets.

While the current financial tumult may have tempted governments away from wider issues to focus on public finance and unemployment, a new report called OECD Environmental Outlook to 2050: The Consequences of Inaction looks ahead over the next four decades to highlight four key areas of major concern: climate change, biodiversity, water and health impacts of pollution.

A new report from the Organisation for Economic Co-operation and Development (OECD) delivers startling numbers and a stark warning to governments neglectful of long-term environmental targets.

While the current financial tumult may have tempted governments away from wider issues to focus on public finance and unemployment, a new report called OECD Environmental Outlook to 2050: The Consequences of Inaction looks ahead over the next four decades to highlight four key areas of major concern: climate change, biodiversity, water and health impacts of pollution.

Though the issues addressed should come as no real surprise, the associated figures are in no way tempered to pacify the masses and have the potential to shock.

The OECD was founded in 1961 to stimulate economic progress and world trade, and currently has 34 member countries, including the UK, the US and Canada, many of the major EU member states as well as Japan and Korea.

OECD secretary-general Angel Gurría said, “Greener sources of growth can help governments today as they tackle these pressing challenges. Greening agriculture, water and energy supply and manufacturing will be critical by 2050 to meet the needs of over nine billion people”.

That’s right: over nine billion people feeding into a quadrupled global GDP. And along with the population increase, the report predicts that world energy demands in 2050 will be 80% higher and still 85% dependent on fossil fuels, with most demand coming from emerging economies.

It becomes clear early on in the report that many of the predictions are inherently but logically linked. Increasing energy demands have a double impact on climate change and health as the continued burning of fossil fuels continues to release greenhouse gases and pollutants.

Air pollution, the report says, will become the top environmental cause of global mortality by 2050 having overtaken unclean water and sanitation—figures for which are staggeringly high today, with 783 million people without access to safe drinking water and 2.5 billion people still lacking basic sanitation. Respiratory failure caused by air pollutants will double to 3.6 million annually with China and India taking the brunt.

Demand for the increasingly precious resource that is water is expected to increase by 55% with manufacturing accounting for an alarming share, putting farmers at risk. 40% of the population will be living with severe water shortage particularly in river basins in North and South Africa and South and Central Asia. Given that the Millennium Development Goal is struggling to deliver on its promises in some areas, this section of the report makes for very bleak reading.

Biodiversity suffers a 10% decline, with Asia, Europe and Southern Africa most affected. Mature forests will dwindle by 13%. And further losses are predicted in global rivers and lakes.

All of these catastrophic scenarios will befall us, says the report, if new policies are not introduced and if inaction reigns supreme.

However, the report is not all doom and gloom. It also offers some solutions, most of which involve adhering to or improving on current policy. Indeed, the report recommends a “cocktail of policy solutions”. For example, raising environmental taxes, truly valuing natural assets like water and biodiversity, ceasing environmentally harmful subsidies and increasing public support for basic R&D.

The report also welcomes initiatives like the UK’s Green Investment Bank, which will inject much needed investment into renewable energy. In fact, increased investment in sustainable projects is an essential ingredient in the solutions that are so desperately needed.

Our recent interview with Simon Ellis provides a great example of the strong link between investment and a sustainable future. If you want to address any environmental concerns piqued by the OECD report by allowing your money to work for you and become part of the solution, fill in our online form and we’ll connect you to a specialist sustainable financial advisor.

Row over air pollution: is it really “business as usual”?