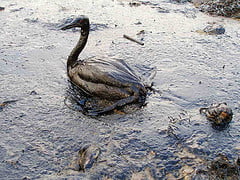 Not only do fossil fuels heavily contribute to pollution and climate change, they also have a particularly bad record for causing large-scale environmental disasters. Blue & Green Tomorrow looks back over ten years of catastrophe.

The latest big one occurred in Papua New Guinea in January, when a $15.7 billion Exxon Mobil gas project caused a deadly landslide, killing at least 25 people.

Not only do fossil fuels heavily contribute to pollution and climate change, they also have a particularly bad record for causing large-scale environmental disasters. Blue & Green Tomorrow looks back over ten years of catastrophe.

The latest big one occurred in Papua New Guinea in January, when a $15.7 billion Exxon Mobil gas project caused a deadly landslide, killing at least 25 people.

Sadly, human-caused tragedies like these have become all too common. This meant that the incident in Papua New Guinea passed off with few international news outlets passing comment.

Recognising the extent and seriousness of these disasters, we’ve come up with a timeline of fossil fuel-related disasters from the past ten years.

It’s by no means an exhaustive list—scary in itself—but it will hopefully highlight the environmental and human costs behind the continued yet increasingly difficult extraction and transport of the fossil fuels we’ve all come to rely so heavily on.

November 13, 2002 – Twenty million gallons of oil spills into the North Atlantic after a tanker bursts a tank during a storm off the coast of Spain.

July 28, 2003 – A tanker carrying nearly 20m gallons of oil runs aground at the Pakistani port of Karachi, causing it to spill much of its load into the Arabian Sea.

November 27, 2005 – Coal dust catches fire and produces a huge explosion at a coal mine in China, killing more than 100.

December 11, 2005 – A massive fire erupts at the Buncefield oil storage facility in Hertfordshire, causing 60m gallons of oil to be lost. Described by the fire chief leading the investigation as the largest in peacetime Europe. Incredibly, there were no fatalities.

February 19, 2006 – Sixty-five are trapped after a gas blast at a coalmine in Pasta de Conchos. Rescue plans are suspended after recovery of just two bodies.

August 11, 2006 – The Philippines experiences its worst ever oil spill, when nearly 530,000 gallons are spilt into the sea off the coast of Guimaras.

March 19, 2007 – A methane gas explosion tears through a Russian coal mine, killing at least 71 people.

April 5, 2010 – A West Virginia mine explodes, killing at least 25. According to the Guardian, it was the worst US mining disaster for more than a quarter of a century.

April 20, 2010 – 20 million gallons of oil from 4.9 million barrels spills into the Gulf of Mexico following an explosion at BP’s Deepwater Horizon rig. Eleven people died in the incident, which reportedly cost the energy company $45m in fines.

October 16, 2010 – 37 people are killed after an explosion at a coal mine in China’s central Henan province. 2,500 tonnes of coal dust engulfs the pit after the blast.

The sheer scale of much of these disasters is difficult to grasp in terms of human cost and catastrophic environmental impact. It paints pretty grim picture of the fossil fuel industry.

The fossil fuel industry is becoming susceptible such incidents as companies become more ambitious in extraction policies and as transport becomes and even bigger issue. And that’s not to mention the environmental cost of burning fossil fuels if everything goes to plan.

Reducing our reliance on fossil fuels is more important now than ever and companies like Good Energy, the UK’s only 100% renewable electricity supplier, can help you convert your home to clean power.

Oil, coal and gas are finite resources and as their cost continues rapidly increase because of increasingly difficult extraction, demand will fall. If large corporations also abandon these wholly unsustainable forms of power generation, we might just stand a chance against the biggest threat to civilisation: climate change.