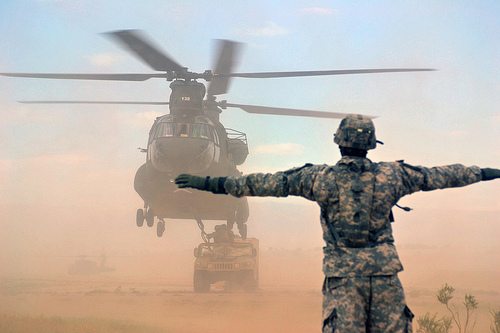 The US Defence Department has suggested that climate instability in the future could lead to global security problems linked to resource scarcity and social unrest which can fuel terrorist activities.

In its 2014 Quadrennial Defense Review (QDR), the Pentagon noted that the combination of climate events such as warmer temperatures and rising sea levels, together with growing population, urbanisation and economic growth, could have devastating effects.

The future scenario might result in rising food costs and competition for water and energy resources. It would put enormous pressure on land and infrastructure, especially in those countries that are experiencing rapid development such as China, India and Brazil.

The report says, “The pressures caused by climate change will influence resource competition while placing additional burdens on economies, societies, and governance institutions around the world.

“These effects are threat multipliers that will aggravate stressors abroad such as poverty, environmental degradation, political instability, and social tensions – conditions that can enable terrorist activity and other forms of violence.”

It adds, “The impacts of climate change may increase the frequency, scale, and complexity of future missions, including defence support to civil authorities, while at the same time undermining the capacity of our domestic installations to support training activities.”

However, the Pentagon remained vague on potential solutions to the crisis it highlighted and reducing its own emissions. It said that the Defence Department “will employ creative ways to address the impact of climate change, which will continue to affect the operating environment and the roles and missions that US Armed Forces undertake”.

It also said, “Our actions to increase energy and water security, including investments in energy efficiency, new technologies, and renewable energy sources, will increase the resiliency of our installations and help mitigate these effects.”