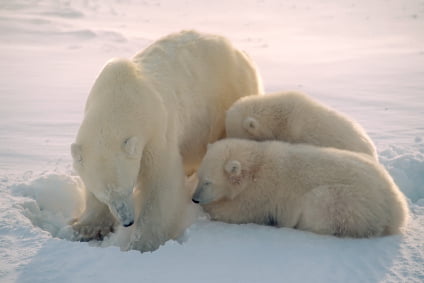 Today is International Polar Bear Day – an event led by the world’s leading polar bear conservation group, Polar Bear International (PBI), to celebrate and protect one of the most elegant creatures on the planet.

PBI created the event to draw attention to the recent decline in the polar bear population, linked to dramatic changes in the Arctic.

The day coincides with the launch of PBI’s thermostat challenge – whereby people adjust their thermostats in an effort to lower carbon emissions. This has been extremely popular across Twitter and Facebook, with international organisations like National Geographic, the WWF, the Association of Zoos and Aquariums (AZA) and Arkive all supporting the challenge.

“Happy #PolarBearDay! ‘Bundle up for polar bears’ and turn your heat down 2 degrees to lower your carbon emissions”, AZA tweeted.

As part of International Polar Bear Day celebrations, PBI will also announce the winners of its Project Polar Bear Contest – a three-month competition that challenged teams of young people to carry out long-lasting community projects aimed at reducing CO2.

PBI is not alone in recognising the need for Arctic conservation. The United Nations Environment Programme (UNEP) recently declared that an international response to challenges in the Arctic was “urgently needed” whilst Chasing Ice star James Balog said during an interview with Blue & Green Tomorrow, “We are clearly in the middle of a crisis already. We are not looking at the crisis coming at us in the future; the crisis is upon us.”