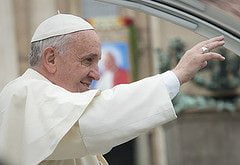 Pope Francis has said that the majority of climate change is man’s fault and criticised climate negotiations for failing to progress quickly enough during his tour of Asia.

According to Reuters, the Pope said,  “I don’t know if it is all [man’s fault] but the majority is, for the most part, it is man who continuously slaps down nature.

“We have, in a sense, lorded it over nature, over Sister Earth, over Mother Earth. I think man has gone too far. Thank God that today there are voices that are speaking out about this.”

Reports suggest that Pope Francis is set to take the unprecedented strop of issuing a call for Catholics to act on climate change.

This isn’t the first time that the current Pope has spoken out about climate change and other environmental issues. Last year he commented that exploiting the Earth was “our sin”, recognising sustainability was “one of the greatest challenges of our time”. He has also called for greater protection of the Amazon, the creation of more ethical investment markets, and spoken out against fracking.

During his Asia tour, the Pope also said he was “disappointed” in the outcome of the climate change talks that happened in Lima, Peru, in December. He stated that the meeting showed a “lack of courage” and criticised delegates for “stopping at a certain point”.

In December this year, policymakers will once again meet, this time in Paris, with the aim of agreeing to a universal treaty on climate change that will help keep global warming limited to a 2C increase, past this point scientists have warned that the effects will become more extreme and unpredictable.

The Pope added, “Let’s hope the delegates in Paris will be more courageous and move forward with this.”