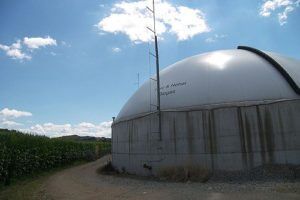 Nearly 9,000 bio-gas plants are currently operational in Germany. 23 MW of newly installed electrical capacity was added in 2015 and, in early July, the 2017 German Renewable Energy Sources Act was adopted.

While the number of plants did increase, the general small size of the facilities installed in 2015 boosted renewable energy generation by a total of 23 megawatts (MW), the smallest annual increase since the Renewable Energy Sources Act (EEG) was first adopted in 2000.

As a flexible complement to wind and solar plants bio-gas power for safe and stable renewable energy supply is essential!

The total installed capacity of all 8,856 bio-gas plants amounts to 4,018 MW. About eight million households are supplied with electricity from bio-gas.

In addition to the 23 MW of added electrical output, existing plants added storage facilities to increase plant performance by an additional 100 MW. When electrical demand is high and/or there is low power generation by wind and solar plants, the bio-gas plants can boost production. On sunny and windy days, or days of low electrical demand, gas can be stored for future use. Together, this results in additional power grid generation of 123 MW.

For 2016, The German Bio-gas Association predicts 26 MW of energy capacity will be added. As in 2015, the association expects the plants to be small manure-based plants, as well as some feed-in systems.

An updated 2017 Renewable Energy Sources Act provides that instead of fixed remuneration the lowest bid wins. However, there are maximum bid prices: For existing installations this is 16.9 cents / kWh and for new plants at 14.88 cents / kWh.

The annual cap is set at 150 MW electrical capacity from 2017 to 2019, increasing to 200 MW per year from 2020 to 2022. Even in existing plants whose EEG tariff is about to expire, continued operation of the plant can be expected through the successful participation in a tender. For existing installations smaller than 150 kW a special rule is valid. Small slurry systems below 75 kW and waste fermentation installations do not have to participate in the tender and still get the fixed remuneration.

“Bio-gas has an important function as a storable energy source for reliable provision of electricity, as a heat source, for the creation of nutrient cycles with organic waste and for the regional value,” Da Costa Gomez says. “With the 2017 EEG, we hope the current stagnation of the German bio-gas market can be overcome, so we can see more new investments, maintenance of existing assets, and expanded production that can be made more flexible.”