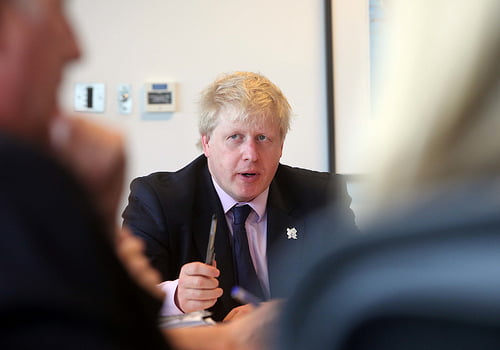 Boris Johnson’s Telegraph column yesterday lauded fracking as “an answer to the nation’s prayers“. But, in a piece that originally appeared on his blog, Tim Fenton unpicks Johnson’s article, which contains facts as solid as the gas the Mayor recommends.

As he is reputed to do every Sunday while waiting for his host to prepare luncheon, London’s occasional Mayor Alexander Boris de Pfeffel Johnson has once more produced his weekly column for the Maily Telegraph – his generator of an annual £250,000 in “chicken feed” – on the subject of shale gas, an energy source that he has embraced with the usual Bozza enthusiasm.

Sadly, such has been his Messianic drive that Bozza has sprinkled his copy liberally with a significant number of whoppers. As a result, the requirement has arisen for someone to call him out on this, given the Telegraph’s editorial staff will not or cannot do their job properly and vet his column for accuracy. The first Johnson howler concerns London’s newest skyscraper, The Shard.

“A new building like the Shard needs four times as much juice as the entire town of Colchester”, he proclaims, to which I call [errant nonsense]. Renzo Piano, architect of The Shard, has estimated that a town of 8,000 (the projected occupancy of the building) would consume five times its energy. Colchester has a population of over 104,000. Do the math. Bozza exaggerates by a factor of just 260.There’s a fail for you.

Never mind, perhaps he’s on firmer ground with wind power: “the total contribution of wind power is still only about 0.4 per cent of Britain’s needs”. Sadly, wrong again: it’s around 4% at quiet periods, and has recently managed over 10% on more than one occasion. So Bozza is out by at least a factor of 10, and as much as 25. So what about shale gas fracking in the USA?

“There have been 125,000 fracks in the US, and not a single complaint to the Environmental Protection Agency”, he tells, so perhaps he can explain the EPA’s continuing investigations into complaints over the water supplies in the state of Arkansas (see HERE, HERE and HERE for example). The EPA does not investigate without somebody prompting them.

But Bozza does have a very valid concern about energy security: “We are therefore increasingly and humiliatingly dependent on Vladimir Putin’s gas or on the atomic power of the French state”. Two things here. The Anglo-French interconnector works both ways, and the place we get all that gas is the state of Qatar, which when I last looked was not under the control of Vladimir Putin.

And what about jobs? “The extraction process alone would generate tens of thousands of jobs”. Not according the Quadrilla,who put the figure at 5,600. So that’s another wild exaggeration, then. Some time ago I called Boris Johnson an “Upmarket Littlejohn”, and it seems I was dead right: he just can’t be bothered doing any research, and says whatever is needed to back up his argument.

That isn’t good enough, except for the Telegraph. No surprise there, then.

This piece originally appeared on the Zelo Street blog.