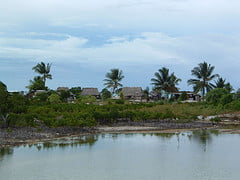 The Kiribati president is negotiating with the Fijian Government to buy land to re-house his country’s people after homes are threatened by rising sea levels. And this just two years after scientists claimed the island was growing.

Anote Tong, the Kiribati president said, “Our people will have to move as the tides have reached our homes and villages.

“This is the last resort, there’s no way out of this one.”

This is not the first time Kiribati has considered relocating. Back in September 2011, Tong said in a speech to the Pacific Islands Forum that drastic action was needed and that he had been looking at plans to build structures similar to oil rigs.

However, it was only in 2010 that news reports stated that Pacific Islands like Kiribati and Tuvalu had increased in land size. In particular, they found that Kiribati’s most populated islands, Betio, Bairiki and Nanikai, had grown between 12.5% and 30%.

The author of the report told the New Scientist, “We’ve now got evidence the physical foundations of these islands will still be there in 100 years”. Given that residents are now faced with environmental eviction, such claims seem somewhat premature.

Greenpeace points out that the issue of rising sea levels goes well beyond small Pacific Island nations—70% of the world’s population live on coastal plains or other areas that could be affected by an increase.

Tong said, “What we need is the international community to come up with an urgent funding package to deal with that ambition, and the needs of countries like Kiribati.”

Sadly, it may be too late to help turn the tide for the people of Kiribati, but the very real nature of the news should make us all think more carefully about what our planet can sustain. Burning fossil fuels is a huge contributor to climate change so we must start moving to renewable energy sources.

We recommend getting in touch with Good Energy to talk about switching to a clean, green alternative energy resource. But more than that, we also need to think about how much energy we needlessly consume. Those changes, in tandem, can help turn the tide of climate change.