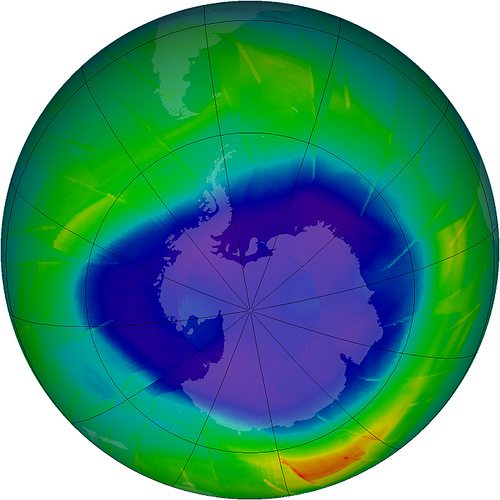 Four new manmade gases, possibly derived from chemicals in insecticides and solvents, have been found to be damaging the ozone layer, which helps filter harmful ultraviolet rays.

Three of the gases are chlorofluorocarbons (CFCs) and one is a hydrochlorofluorocarbon (HCFC). Two are accumulating at worrying rates in the atmosphere, but scientists have not identified the exact sources yet.

“The identification of these four new gases is very worrying as they will contribute to the destruction of the ozone layer”, said Dr Johannes Laube from the University of East Anglia and lead author of a new study into the four gases.

“We don’t know where the new gases are being emitted from and this should be investigated. Possible sources include feedstock chemicals for insecticide production and solvents for cleaning electronic components.

He added, “What’s more, the three CFCs are being destroyed very slowly in the atmosphere – so even if emissions were to stop immediately, they will still be around for many decades to come.”

Scientists said that the new gases are manmade because they were not seen in the atmosphere until the 1960s. One of the gases, named CFC-113, is said to be of particular concern, as it is an insecticide coming from a very small but growing emissions source somewhere as yet unidentified.

CFC and HCFC gases have been found to damage the ozone layer, which is essential to filter ultraviolet rays that can cause cancer in humans.

A hole in the ozone layer was discovered over Antarctica back in 1985. Governments agreed to phase out dangerous chemicals with the Montreal protocol in 1987, but HCFCs are still being used in some countries to refrigerate.