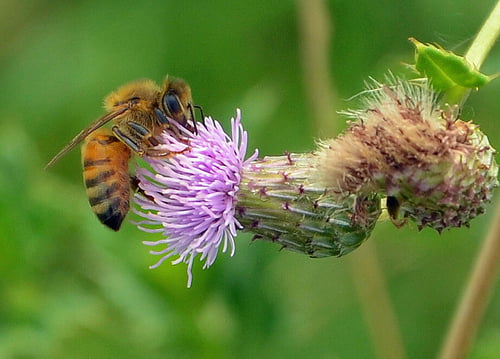 A coalition of campaign groups are taking to the streets of London to urge the government to get behind plans to ban three harmful streams of pesticide that research suggests are harmful to bees.

Eleven organisations, including Avaaz, Friends of the Earth, Greenpeace, the RSPB and 38Degrees, are rallying in Parliament Square, outside the Houses of Parliament.

Earlier this month, a cross-party group of MPs recommended that the government suspended the use of the three neonicotinoids that have been linked to the declining bee population. This followed a European Food Standards Agency report that picked out a number of risks posed by the chemicals to bees.

But environment secretary Owen Paterson’s refusal to back an EU-wide ban has forced campaigners to take matters into their own hands.

As disclosed in parliament this week, David Cameron is patron of the Oxfordshire Beekeepers’ Association. Campaigners will therefore hope the prime minister agrees to take action on the decline.

“Ministers can’t ignore the growing scientific evidence linking neonicotinoid insecticides to bee decline. Their claims to be concerned about bee health will ring hollow if they fail to back European moves to restrict the use of these chemicals”, said Andrew Pendleton head of campaigns at Friends of the Earth, which in January delivered 64,000 signatures to Downing Street, urging Cameron to make 2013 the “year of the bee”.

“An ever-growing number of the UK’s leading retailers and manufacturers are recognising the threat these products pose by removing them from their shelves and supply chains – the government must now act.

“If we lose our bees and other vital pollinators it will have a devastating impact on our food, gardens and environment. We urgently need tougher pesticide restrictions and a British Bee Action Plan to tackle all the threats they face.”

Supermarket Waitrose and hardware stores Homebase, B&Q and Wickes are among the retailers to have already pulled the chemicals from their shelves.

An article in the Financial Times this morning however, by the government’s new chief scientific adviser Mark Walport, recommended that the neonicotinoid ban was dropped.