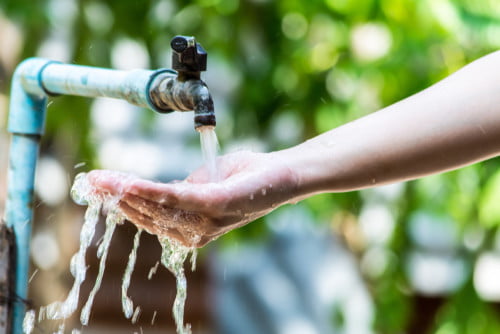 Most of us who access our water from a public system spend very little time thinking about where our drinking water comes from or how it’s disinfected. Since the 1970s, the Environmental Protection Agency has been regulating public reservoirs and surface water supplies to rid them of a long list of contaminants, allowing us to fill up our glasses without a care.

But according to the same agency, as many as 15 million households across the country are not connected to the national network of 100,000-odd water treatment sites. Instead, they draw their supply from their own private wells.

Wells on private land don’t fall under any government regulations or responsibilities, which means it’s up to owners to take measures to protect themselves from contaminants. This might mean installing a well water filtration system, using disinfection chemicals, or otherwise self-testing and treating their supply.

However well owners decide to purify their drinking water, the task is critical for keeping families safe. But despite this, the topic of private water rarely comes up in discussions about public health.

Your well might be a lot worse than you think. Therefore, you might want to find someone that can naturally purify my well water.

Here are five reasons why we need to have more conversations about drinking water from private wells.

1. A lack of regulation for tens of millions of people

America’s mixed record on environmental protection and public health means that many are skeptical of their tap water. But while there have been a handful of high-profile disasters relating to drinking water over the past decades (lead poisoning in Flint, Michigan being the most famous), the truth is that the US does a pretty good job of maintaining the cleanliness of its lakes, rivers, and reservoirs.

These government initiatives and investments, however, often don’t extend to groundwater—deep aquifers containing vast water reserves—and rarer still, the millions of private wells that tap into these supplies.

It’s therefore critical for all private well owners to understand that no official regulations apply to their water, and the drilling of a well in no way guarantees that the water is drinkable. Some may assume that the presence of a pre-existing well on a property means that its contents have been tested and verified, but this may not be the case.

Likewise, we could all benefit from greater awareness about the lack of drinking water regulation in less-populated areas of the country. When was the last time that you considered the safety of the water being used in a rural store or roadside restaurant?

For many, private wells conjure ideas of sparkling springs and mineral-rich aquifers—and it’s true that groundwater sources can produce some of the purest, tastiest H2O around. However, the majority of wells are not so idyllic, and if improperly maintained, can be home to bacteria, viruses, and chemicals that carry very real health risks.

Worse, contaminants like giardia or lead have no visible signs, noticeable tastes, or smells, so there’s no way to know off-hand what’s lurking down a well. This is why it’s so important for well owners to regularly test their water, whether by using a home testing kit or by sending off samples to professional labs.

While it’s not possible to identify most contaminants with your senses alone, surveying the local environment can give clues about the most likely threats to water quality. For example:

Many older private wells were drilled at a time when the surrounding landscape was emptier and more rural, and those doing the drilling may not have considered the effects of increasing demand and growing levels of activity around the groundwater site.

Encroaching agriculture, manufacturing plants, and roadways can be a particular problem for shallow wells, where oil, chemicals, and bacteria can accumulate in surface runoff and wash into the system.

As the global climate becomes more unstable, there’s an inevitable negative effect on local weather and natural resources. Across large swathes of the country, water networks are becoming volatile forces that are destructive in different ways.

In western states, heatwaves, drought, and desertification are leading to a dip in groundwater supplies and serious worries about the ability of surface water sources to meet demand. Some of the largest cities in the US are currently fed by the Colorado river basin—a body of water that has only reached the ocean a handful of times over the past few decades.

In southern and eastern areas, on the other hand, flooding and storms not only cause property damage and threaten lives, but have the effect of washing sewage, oil, and chemicals down shallow wells. This results in boil-water orders and long-term contamination.

5. More drinking water difficulties are on the horizon

With groundwater and streams drying up in the West, farmers and urban developers are facing unprecedented challenges when it comes to accessing plentiful water supplies. Recently, the town of Oakley in Utah became the first major urban center to halt new home development planning due to a lack of water, and many large California farms are investing in their own vast irrigation networks.

As reservoirs and other surface water resources become more strained, it’s likely we’ll see a rise in new well drilling, which will also need careful management. Government agencies and local communities will need to become more aware of the health of their surface water and public supplies so that shortages and contamination can be quickly dealt with before they become public health crises.