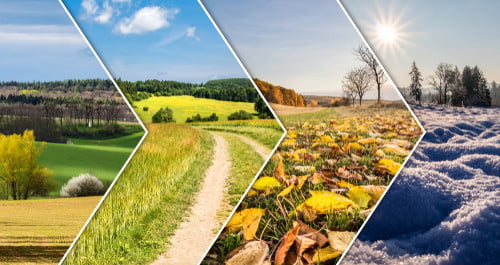 Climate Change Is Doing Crazy Things To The Seasons

Of course, Greta is not alone. The proportion of Americans that say global warming is a serious threat has risen from 40% in 2013 to 57% in September of this year. The rise has mostly been among democrats, but even republicans are starting to come around, especially among millennial conservatives.

While global warming has started to get more attention, we have not spent as much time talking about how it has affected us so far. There are some things that we all need to be aware of.

One of the biggest issues is with changes in the seasons. We need to first understand how the seasons work, then we can talk about the impact of climate change.

General Overview of the Seasons

Have you ever wondered about the seasons, and what causes them to change? Why the leaves fall from the trees in fall, but how they are born again as green buds in spring? How do seasons vary in different parts of the world?

The Story of the Seasons

Why is it that when it’s winter in the United States, it’s summer in Australia? The science of the seasons has led people in the Northern Hemisphere to seek out ‘winter sun’ since the dawn of time. But what is it that causes the difference?

Australia’s summer is at the end of the year because that’s when the Southern Hemisphere is tilted toward the sun. The days are longer, because the continent spends more hours facing the sun than most other parts of the world. In the Northern Hemisphere, the science is the same, but we spend our time in the sun in the middle part of the year rather than the end. It works the same way in reverse, too. While Australians are planning Christmas barbecues, we’re in the depths of winter, and while we bask in the summer sun, Australians are wrapping up warm – as warmly as they ever need to, anyway!

What about spring and fall? It’s a little more complicated, but put simply, in these seasons, the planet isn’t tilted either toward or away from the sun. It’s somewhat sideways-on. These seasons only happen in certain parts of the world. In the tropics along the equator, and close to the poles, places might have only two, or even one, distinct seasons.

At the poles, it’s consistently cold, but there are still two seasons. It’s just that summer in the arctic regions is about as warm as the coldest winter day anywhere else on the planet! Also, because the entire area is tilted toward the sun during the polar ‘summer,’ it’s always daytime, and always night in winter.

In the tropics, it’s consistently hot. However, there are still two seasons, the summer and winter. These parts of the earth are closer to the sun than anywhere else on the planet and stay pretty warm. Most of the difference in weather comes from the rain. The seasons are ‘wet’ and ‘dry’ rather than summer and winter.

Why Is Australia Hot?

While we’re talking about seasons, let’s think about why Australia is so hot year-round. Like parts of the United States, Australia has large areas of desert that tend to be warm and dry year-round, but unlike the continental United States, it also has large areas with a more tropical climate. This means that some parts of the country get a lot of rain. However, it’s still usually hot while it’s raining! Fortunately, MyLawnCare in Toowoomba is on hand to take care of any garden issues that come up due to the weather.

The only part of Australia where it ever gets ‘cold’ is the south. It’s strange for people in the Northern Hemisphere, as we’re used to southern areas being warmer! But then again, in Australia, the north of the country is closer to the equator, so it’s warm year-round.

How Climate Change is Affecting the Seasons

As you can see, most climate differences around the world are due to geography and exposure to the sun. However, a lot of seasons are changing because of climate change.

The National Oceanic and Atmospheric Association has talked about data on the changes of the climate. They said that the most evident impact of climate change is shifting growing seasons.

The data is very clear that climate change is having an impact on seasons. For now, it may seem like a good thing as growing seasons become longer. However, as climate change progresses, many prime growing areas will be too arid to grow food. Scientists have shown that California’s agricultural industry is suffering due to climate change. This is very concerning, since California produces 13% of the United States agriculture output.

Climate Change is Having a Scary Affect on the Seasons

Climate change is doing some scary things. The biggest concern is that it is changing the seasons around the world. Growing seasons are shifting and areas that produce food may not be able to once the seasons become too hot.