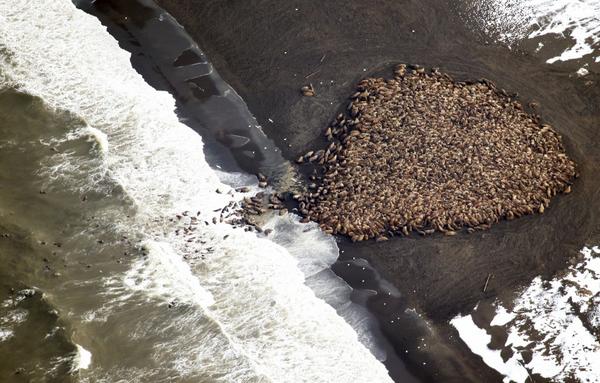 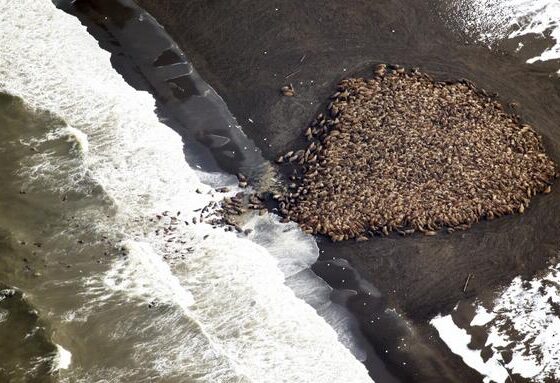 Thousands of walruses forced onto Alaskan shore by Arctic melt

The loss of Arctic sea ice has caused around 35,000 walruses to come ashore on a beach in Alaska, with the US forced to reroute flights in order to avoid scaring the animals.

The phenomenon was noticed by the National Oceanic and Atmospheric Administration (NOAA), which photographed the animals near Point Lay, a village north-west of Anchorage.

Scientists have linked the massive gathering to the loss of summer sea ice, which is being accelerating by global warming.

Walruses usually use ice sheet to rest, but they are now running out of offshore sea ice. The high numbers onshore have now triggered fears that young animals might get scared and that any noise could cause a mass stampede.

For this reason, the Federal Aviation Authority has rerouted flights, while locals and the media have been asked to stay away.

“The walruses are telling us what the polar bears have told us and what many indigenous people have told us in the high Arctic, and that is that the Arctic environment is changing extremely rapidly and it is time for the rest of the world to take notice and also to take action to address the root causes of climate change.”

Some of the most iconic polar animals have been struggling as the effects of climate change become more evident.

In Antarctica, scientists found earlier this year that some emperor penguins have been forced to climb high ice walls to reach new breeding grounds, as their habitat has been affected by warming.

More recently, a report found that human activity has caused global wildlife to halve over the past 40 years.