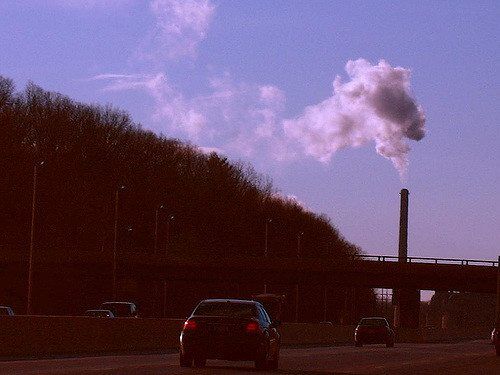 Energydesk have learned that these poisonous particles are not being monitored by Government Authorities.

Last month new research was published that revealed magnetite particles, derived from iron oxide, were present in the brain tissue of 37 people. Other studies have linked such particles to Alzheimer’s disease, although scientists say the research field is at too early a stage to prove causality.

But Prof Barbara Maher at Lancaster University, who led the research, said that magnetite should start to be monitored on a wide-scale if this is found to be the case.

“If magnetite in airborne particulate matter proves to be a significant risk factor for Alzheimer’s disease or other diseases, then it will be important to measure it in its own right across urban areas,” Maher told Energydesk.

Although particulate matter, which magnetite contributes to, is monitored across the UK according to EU rules, magnetite is not monitored separately.

The news comes as a case in the High Court in London opens for its second day to assess whether the government’s plans to cut national pollution are adequate under EU law.

“It is clear that along with illegal levels of N02 from diesel cars, particulate matter and its components are serving up a cocktail of toxic air that people across the UK are forced to breathe.

Monitoring these toxins is the first step to wining this toxic battle, but it would be a meaningless effort if the government keeps failing to take concrete action and continues putting car companies’ profits and political comfort before people’s health. It is not only about the future generations, it’s about the children that are now at risk”.

These same types of magnetite particles were found in “abundant” quantities in the brains of people from Manchester, in the UK, and Mexico.

Magnetite particles in air pollution could be measured on a wide-scale using filters or through leaf collection, Maher added.

Leonardo Sagnotti, senior principal research fellow at the paleomagnetism laboratory at the National Institute of Geophysics and Volcanology (INGV) has used a similar methodology using leaves to measure magnetite pollution in Rome.

He told Energydesk: “There is no established service using tree leaves to monitor pollution, only research studies. The automatic sampling stations in Italy don’t monitor any magnetic properties. It’s not surprising because this is a novel approach and eventually we should adopt this approach for monitoring in the future.”

His research notes that such a service would be “relatively rapid and inexpensive, [and] may be used in addition to the classical air quality monitoring systems to identify and delineate high-polluted areas in urban environments.”

Air pollution is a global killer, responsible for 3 million premature deaths every year, according to a recent analysis by the World Health Organisation (WHO). Research has shown that particulate pollution, created by industry, traffic and natural sources can exacerbate lung cancer, heart disease, asthma and strokes.

But while WHO compiles a database of levels of PM pollution from 3,000 cities around the world, one billion people live in countries where there is no monitoring at all.

WHO told Energydesk that they do not issue guidance on pollutants smaller than PM2.5, but that they may be addressed in the next edition of their air quality guidelines.

“WHO is not aware of magnetite being monitored in any country, and since countries are already not engaged in monitoring PM10 and PM2.5, it is unlikely that they monitor smaller particles,” a spokesperson said.

Maher’s paper also notes: “Although PM mass has conventionally been used for setting of legislative airborne PM concentration limits, it is possible that ultrafine particle size and number are of greater significance in terms of mortality and health impacts”.

The Department for the Environment, Food and Rural Affairs did not comment on magnetite monitoring but a government spokesperson said: “The government is firmly committed to improving the UK’s air quality and cutting harmful emissions”.