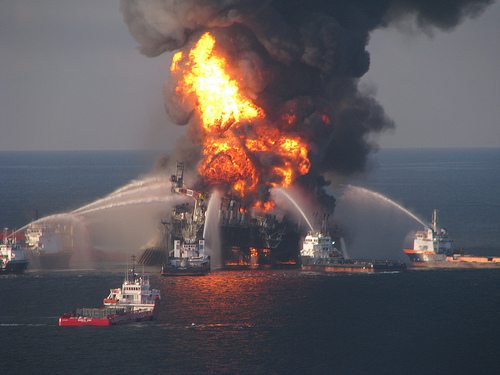 Many of the toxic pollutants spread by the 2010 Deepwater Horizon oil spill still persist across the Gulf of Mexico, a new study has found.

The disaster, at BP’s offshore oil rig, cost the lives of 11 workers and spilled 5 million barrels’ worth of oil into the Gulf of Mexico.

In a paper published in Frontiers in Microbiology, researchers revealed that a species of bacteria is consuming some of the compounds released. The bacteria, named Colwellia, is removing some pollutants, such as gaseous hydrocarbons and benzene, from the waters.

However, it would appear Colwellia does not have a taste for some of the most toxic compounds that were spread by the disaster.

Polycyclic aromatic hydrocarbons (PAHs) are a group of organic compounds that are present in crude oil and have been linked with serious health problems, including cancer.

The team found that in many of their sediment samples taken from around the Deepwater site, PAHs remained in such a high concentration that they exceeded the US Environmental Protection Agency’s water quality standards.

“Those PAHs could persist for a long time, particularly if they are buried in the ocean floor where lack of oxygen would slow PAH degradation by microorganisms,” explained Prof Olivia Mason of Florida State University.

“They’re going to persist in the environment and have deleterious effects on whatever is living in the sediment.”

The publication of this latest study comes just days after another warned that the environmental impact of the spill may be greater than scientists fist feared.

The paper, published on Monday, found that deep sea corals over 20 kilometres from the spill site have been hit by oil damage.

It was recently announced that many shareholders, including a number of London councils, are suing BP over the oil spill, after a US court ruled they are allowed to claim compensation payments.

The lawsuit, launched by New York-based Pomerantz Law, has received the backing of Kensington and Chelsea council, the City of Westminster council, Cumbria county council and the Shell Pension Trust.