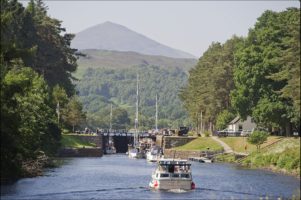 An announcement from organisers has revealed that three highly regarded industry experts will join the bill at the 2016 World Canals Conference in Scotland. Roland Lewis, Pete Grannis, and Daniel Fábrega, from the Americas, will speak at the prestigious event with a variety of other internationally recognised speakers in September.

Hosted on the banks of the majestic Caledonian Canal in Inverness, the prestigious four-day conference will take place on 19 – 22 September and will see more than 300 business leaders and global professionals celebrate innovative thinking and cutting-edge delivery in a range of disciplines including sustainable tourism development, regeneration, heritage management, climate change and engineering within the iconic landscape of the Scottish Highlands.

Roland Lewis, President and CEO of the New York Waterfront Alliance, will draw on his extensive experience in leading the transformation and regeneration of New York and New Jersey’s waterways and 700 miles of shoreline into a vibrant, healthy, resilient, and accessible resource as keynote speaker on day two of the four-day conference. Since its inception in 2007, the Alliance has grown into a coalition of more than 900 organisations working together to bring about real change in New York and New Jersey.

Completing the trio of speakers from the Americas is Daniel Fábrega, Panama’s Ambassador to the United Kingdom. Mr Fábrega was educated in Panama and the United States, earning a Bachelor’s Degree in Business Administration at Loyola University in New Orleans, followed by a Master’s in Business Administration at the Universidad Latinoamericana de Ciencia y Tecnología (ULACIT) in Panama. Before his appointment as Ambassador, Mr. Fábrega has served as a Company Director and the Vice President for Exports for Varelas Hemanos S.A. Under his watch, the company’s worldwide sales more than doubled, helping to provide yet another element to Panama’s thriving business economy. Mr Fábrega will speak of the vital role of the Panama Canal in his nation’s economy during day two of the World Canals Conference.

Steve Dunlop, Chief Executive of Scottish Canals, said: “We’re absolutely delighted to be able to announce the addition of three highly-regarded speakers from the Americas to the programme of this September’s World Canals Conference. With an array of world-renowned speakers set to join us amidst the myth and majesty of the Scottish Highlands, this year’s conference is set to be the best yet.

“From Panama to Paris, there are a huge number of innovative projects taking place on canals all over the globe and waterways continue to play a vital role in the communities that line their banks. The World Canals Conference will celebrate those achievements, highlighting pioneering work in everything from water management and regeneration to climate change and engineering.

“With just over three months to go until the World Canals Conference, we’re taking this chance to remind everyone that tickets are still available and we have a fantastic programme of speakers, study trips and social events to look forward to. We can’t wait to welcome the world to Inverness and the Caledonian Canal this September.”

As the biggest event in the international waterways calendar, Inverness joins an illustrious list of past World Canals Conference hosts including the Grand Canal in China, Montreal in Canada and New York in the USA. As well as innovative projects from around the globe, the World Canals Conference will also celebrate developments along Scotland’s 137-mile waterway network, from the creation of The Kelpies – the largest equine sculptures on the planet – to The Falkirk Wheel’s role as the world’s only rotating boat lift and an iconic tourism destination.

Once the transport arteries that stoked the fires of the industrial revolution, today Scotland’s canals are home to cyclists and social enterprises rather than coal scows and Clydesdale Horses. Passing through some of Scotland’s most beautiful landscapes and the bustling cities of Glasgow, Edinburgh and Inverness, the 250-year-old waterways are increasingly vital venues for business, leisure and tourism that attract more than 22 million visits a year.