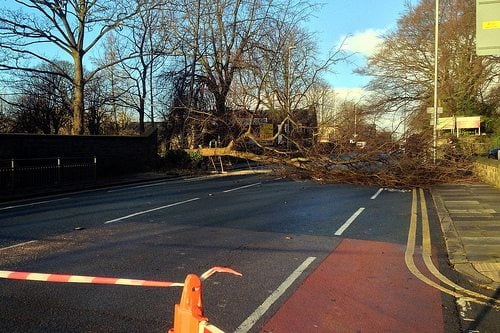 UK weather: 80,000 homes without power after 112mph winds on Wednesday

Tens of thousands of homes are without power across England and Wales, after winds of up to 112mph battered the UK on Wednesday.

The Met Office issued a rare red warning, with the hurricane-force gales causing severe travel disruption. Train services in many parts of the UK remain cancelled while some roads are closed.

Debris and other objects picked up by the winds caused damage to power lines across the UK, with Wales bearing the brunt.

About 80,000 properties are still without power, according to the Energy Networks Association. Some 60,000 of these are in Wales. The organization says that engineers have already restored power to another 145,000 homes and businesses since the storm hit.

Forecasters say Thursday will be relatively calm, but warn that yet another area of low pressure coming in from the Atlantic could bring 80mph on Friday.

The Environment Agency still has 16 severe flood warnings in place – 14 along the banks of the Thames in Berkshire and Surrey and two more in the south-west covering the heavily flooded Somerset Levels.

This winter has been one of the wettest on record for many southern areas, with the Met Office’s chief scientist Dame Julia Slingo calling it the “most exceptional period of rainfall in 248 years.”

With the expected strong winds will come further heavy rainfall in affected areas, as no end to Britain’s flood crisis is yet in sight.

It said that while there is “no definitive answer on the possible contribution of climate change to the recent storminess, rainfall amounts and the consequent flooding”, there is consistent evidence suggesting that “daily rainfall rates are becoming more intense, and that the rate of increase is consistent with what is expected from the fundamental physics of a warming world”.

Slingo added, “There is no evidence to counter the basic premise that a warmer world will lead to more intense daily and hourly rain events. We have records going back to 1766 and we have nothing like this.”