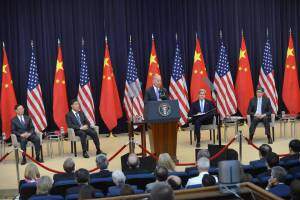 “The Paris Agreement could be the next nail in the coffin of the fossil fuel industry if governments actually follow through on their commitments. The only way to reach the 1.5° or 2.0°C targets is by keeping coal, oil and gas in the ground. While it’s not everything we hoped for, the implementation of the Paris Agreement will radically remake the energy sector. The US-China announcement serves as another warning bell for investors to take climate risk seriously and divest from fossil fuel companies.

While people celebrate the agreement, let’s remember there is still a dangerous gap between what the governments are signing up to, what they are doing, and the real ambition we need to avert the worst impacts of climate change. As a movement, we will continue to push governments to go well beyond their current targets and accelerate the transition to 100% renewable energy.”

The U.S. and China together comprise 40 percent of world emissions, their ratification makes it very likely for the agreement to come into force this year.