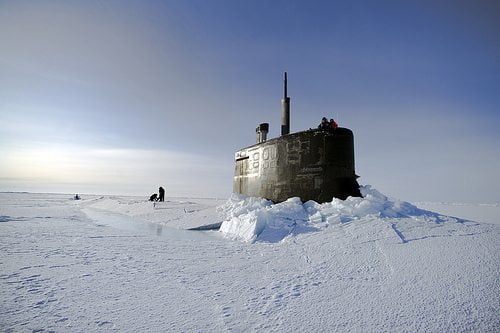 The US navy is to publish a new strategy in the coming weeks detailing how it plans to address the increase in commercial shipping traffic, oil and gas exploration and tourism caused by the melting of the Arctic.

The Wall Street Journal revealed the existence of the strategy paper on Sunday, saying that they had reviewed a draft copy.

In November, the US secretary of defence Chuck Hagel outlined how the US must turn the area into a “secure and stable region”, and also suggested how natural resources that are made newly accessible by climate change could be exploited.

The new paper concludes that the navy currently lacks “operational experience” in the Arctic, and that it will require improved satellite coverage and more ships equipped for the extreme conditions as the region becomes more active.

However, it adds that this will be especially difficult with the government enforcing Pentagon budget cuts.

“This is not a good time to be putting a lot of bills on the table,” Army General Charles Jacoby, the top officer at Northern Command, the military headquarters that oversees the Arctic Ocean, told the Wall Street Journal.

The paper warns that significant spending will be required to properly police the first new ocean to open to the US since the annexation of the Pacific Northwest in 1846.

For example, according to The Wall Street Journal some sources say the navy will need as many as 10 icebreakers – at a cost of around $784 million (£477 million) each —to keep newly opened shipping lanes safe.

There is some debate about how soon such spending  will be required. Danish shipping company AP Møller-Maersk, which carries 15% of all seaborne freight, say Arctic routes will not be economically viable for some time.

However, the navy predicts that by 2040, trade ships will be able to navigate the waterways for much of the year.

Another noteworthy feature of the strategy paper is that, though military scientists have avoided publically suggesting why it is happening, the US navy is in no doubt why the Arctic is melting. “Climate change has had a visible and direct impact on the Arctic region,” the paper concludes.

“I don’t have the luxury of having a political opinion on this,” Jacoby adds.

“It has happened. And it needs to be accounted for.”

Last year, Arctic sea ice cover increased from some of the record low levels measured in 2012 – a fact that was seized upon by climate change sceptics as evidence disproving global warming.

However, this recovery contradicts long-term trends. One recent study suggested the Arctic could be ‘ice-free’ by 2054.