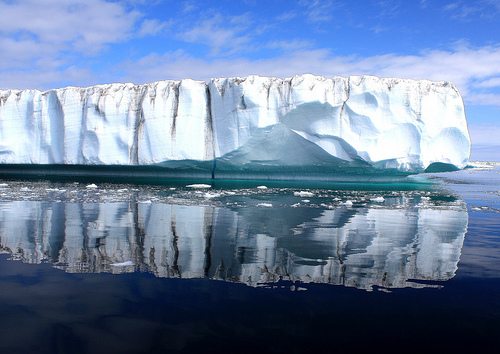 Far beneath the flat, tranquil surface of northern Greenland’s ice sheet, scientists have discovered vast ice structures as tall as skyscrapers and as wide as the island of Manhattan.

The formations are caused when ice at the base of the glacier melts and refreezes over hundreds of years, in a process that may be quickening the glaciers’ slide into the sea.

Using radar from airborne surveys, researchers found that the structures, which cover about a tenth of northern Greenland, are made not of rock as previously believed, but of ice.

“But then suddenly these things appear on the screen. It’s very exciting. You get a sense of these invisible processes happening underneath.”

The features are larger and more common in areas where the ice moves faster, suggesting that the refreezing process disturbs and warms the ice above, accelerating their journey towards the sea.

Reporting on their findings in the journal Nature Geoscience, scientists say the discovery could help efforts to predict how climate change will affect the ice sheets of Greenland and Antarctica and cause global sea levels to rise.

Greenland’s ice sheet – the only ice sheet to exist outside of Antarctica – has been one of the biggest contributors to rising sea levels over the last 20 years.

Climate change has caused regional temperatures to warm, and in another recent study scientists warned that even the northeast corner of the ice sheet – previously thought to be stable – has been losing more than 10 billion tons of ice every year since 2003.

The Intergovernmental Panel on Climate Change (IPCC) has warned that global sea levels could rise by between 26 and 82 centimetres (0.85-2.7ft) by the end of the century if stronger efforts are not made curb climate change.

However, subsequent findings have suggested that even this stark warning is overly optimistic, after the irreversible collapse of the West Antarctic ice sheet was confirmed.

This process, which may take hundreds of years, means that a potentially devastating eventual sea level rise of up to 4 metres (13ft) is guaranteed.