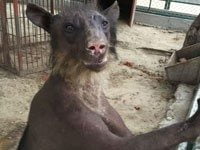 VIDEO: Cholita, the real-life Paddington bear gets a manicure

Cholita, ‘the real-life Paddington bear’ who won peoples’ hearts with her sad life of abuse in the circus, has been given a full heath check and manicure by her rescuers, Animal Defenders International (ADI). A new video shows 25-year old Cholita’s ultrasound, health check, manicure of overgrown back claws and heart-warming first steps on her restored paws.

Cholita was stolen from the wild as a baby and taken to the circus where her fingers were brutally cut down to stumps to remove her front claws and her teeth broken off. The stress of her captivity caused her to lose nearly all of her hair, prompting support from Paddington bear author Michael Bond. The author of the bestselling children’s books said: “Bears, especially from Peru, obviously have a special place in my life. It is such a horrendous story. I very much hope that, with the charity’s help, Cholita will get the care she needs to recover.”

The loss of her front toes has left Cholita permanently crippled, but the condition of her back feet, with severely overgrown nails, needed attention. With her advanced age and delicate state of health, sedating Cholita to trim her nails and perform a thorough veterinary health examination was a concern. The team waited until Cholita’s health and strength had been improved enough to move to her new forest home, and once she was settled in, it was time to move forward with the procedure.

Cholita was lured with grapes and darted with a very carefully balanced sedative. Once she was asleep, she was hooked up to a constant oxygen supply and monitors for blood pressure and temperature as ADI vets worked quickly to perform blood tests, ultrasound scans, a dental check and full physical examination. Finally, Cholita’s nails were trimmed, buffed and oiled, experiencing the best manicure a bear can have.

Animal Defenders International President Jan Creamer said, “Everyone who has lived with an elderly animal knows sedation is a risk, so it was wonderful to see her up and about and ready for a hearty breakfast as soon a she woke up.  Considering her age and the hard life she has endured our veterinary team are pleased with her progress.

“Now that Cholita’s claws on her back feet are normal, she will be much more comfortable moving around and she will have a better quality of life.  Since arriving she has been in her pool, she reaches up into the trees, lays on her log platform and likes to get into her dry earth hole as well, when she is not napping in her cave. She really is home where she belongs and I don’t think even she can quite believe it!”

Cholita was seized from a Peruvian circus and now lives in a large habitat funded by ADI supporters at Reserva Ecologica Taricaya, next to the Tambopata National Reserve in the Peruvian Amazon, where ADI will fund her care for life.  The organisation hopes to establish the new habitat as a centre for more rescued bears.

Jan Creamer, “We hope to have even more exciting news for Cholita, because we are negotiating for the handover of two more spectacled bears called Lucho and Sabina. Lucho was confiscated from a circus like Cholita, and Sabina is from the illegal wildlife trade. We have started work on enclosures for them, next door to Cholita. It will be the perfect happy ending to Cholita’s story to see and hear other bears again after all these years.”

Long time Animal Defenders International supporter Joanna Lumley OBE launched an emergency fundraising appeal to enable the animal protection organisation to rescue the two bears and return them to their natural forest home. Joanna said, “The suffering and abuse Cholita endured was so clear to see. Animal Defenders International has given her a happier life, but now urgently requires our help to rescue two more bears in need. Please donate now to give these bears the storybook ending they deserve.”

UK volunteering organisation Projects Abroad is helping with construction of Lucho and Sabina’s rainforest habitats and ADI is providing the materials and transport to the remote sanctuary.

ADI is urgently calling for funds for lifetime care and veterinary attention for Cholita and friends.  Please donate now or 020 7630 3340.