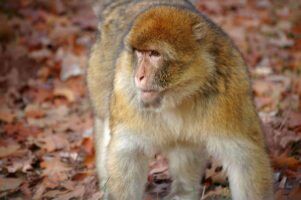 For the first time in 30 years, increasing the protection for a monkey species will finally be discussed by the Parties to the Convention on International Trade in Endangered Species (CITES). In Johannesburg, barbary macaques will take centre alongside emblematic fauna such as elephants, lions, rhinos and sharks.

The CITES Meeting of the Conference of the Parties (CoP17), which is currently taking place in South Africa, has the power to change the fate of Barbary macaques and stop their race towards extinction. In an almost unprecedented move, all range States and the main consumer countries providing the market for these animals have rallied together behind a joint Morocco-EU proposal to transfer the species to Appendix I of the Convention, which will afford them the highest level of international protection from trade and help enhance enforcement measures against trafficking in this species. The proposal has also received overwhelming support from the global animal welfare and conservation community.

The Barbary macaque (Macaca sylvanus) is the only African primate species north of the Sahara, the only macaque species in Africa and the only non-human primate living in the wild in Europe (Gibraltar). In the last 30 years, the populations of this unique primate in Morocco and Algeria have dwindled from approximately 23,000 to the latest estimates of 6,500 – 9,100. The largest wild subpopulation, which inhabits the mixed cedar forests of the Middle Atlas Mountains in Morocco, has been decimated: only 5,000 remain, a 65% decrease in just three decades.

A significant number of Barbary macaques, mostly infants, are illegally captured from the wild and traded every year, mainly to feed the European exotic pet trade and to be used as tourist photo props. The protection granted to the species both in Morocco and Algeria, its listing on Appendix II of CITES and an EU import ban have done little to help curb poaching and trafficking in these intelligent and sensitive endangered primates. This criminal activity is increasingly in the hands of organised international networks. Barbary macaques remain the most frequently seized CITES-listed live mammal in the EU.

The illegal trade is pushing Barbary macaques to the brink and action must be taken before it is too late.

“The illegal trade is pushing Barbary macaques to the brink and action must be taken before it is too late. Like so many wild animals, these little monkeys are paying the price for unscrupulous traders bartering with their lives.” It is estimated that approximately 3,000 Barbary macaques could be currently being kept as pets in Europe.

“I refuse to stand by and do nothing as these endangered monkeys are snatched from the wild and their families for photo props and the pet trade. Barbary macaques need our urgent help and I hope governments will join ADI and ‘back the macaque’ and grant them the greater protection they need”.
Gerben Jan Gerbrandy, Member of the European Parliament for D66 and Head of the European Parliament Delegation to CoP17, agrees on the importance of this moment: “The adoption of the joint proposal from the EU and Morocco would be a key next step in protecting a species for which the EU is unfortunately a key destination market. Now we have to make sure that any agreement is properly and coherently enforced to the fullest effect. That is where the real difference will be made.”

North Africa is the gateway to Europe for other illegal wildlife products, including live specimens such as endangered tortoises. Tackling Barbary macaque trafficking is expected to help with protection of other endangered species, some of which are also on the agenda at CoP17.

“This truly unique and endangered primate species needs all the protection we can provide as international community. The highest possible protection from CITES will strengthen conservation efforts underway to help the Barbary macaque survive and thrive. It makes total sense to support the range states, Morocco and Algeria, in this goal,” adds Rikkert Reijnen of the International Fund for Animal Welfare (IFAW).

Highly intelligent, emotional and sensitive, Barbary macaques live up to 22 years of age, in social groups comprising as many as 80 individuals, with males playing a primary role in caring for their young. They prefer high altitude cedar forests, but can also be found in oak forests, coastal scrub, and rocky slopes, feeding on fruits, tree leaves, and plants.

Having campaigned for over 20 years to educate the public about the use of primates for entertainment, research, and as pets, exposing the huge numbers of animals taken from the wild each year and the suffering of the animals during captivity and transport, the plight of the Barbary macaque is a cause close to the heart of Animal Defenders International (ADI).

Last year, ADI rescued more than 30 illegally traded monkeys in Peru during an 18-month mission against wildlife trafficking and to enforce a ban on wild animals in circuses. Over 100 animals were saved during the operation. Having nursed the monkeys back to health, ADI relocated new family groups from six different primate species to sanctuaries in their native Amazon habitats where ADI continues to fund their care for life.

ADI previously rescued two Hamadryas baboons – one from a Bolivian circus and the other from the pet trade in Cyprus. They now live happily together at the Lakeview Monkey Sanctuary in the UK, where ADI funds their care for life, along with three macaques born at the notorious and now closed Israeli monkey breeder Mazor Farm. Born to wild-caught parents, Baloo, Betty and Boo were sold to a European research laboratory and used in neurology experiments. When the monkeys were no longer required, ADI stepped in to save them from being killed.

Scientific support for the proposal

Dr. Shirley McGreal of the International Primate Protection League has also expressed strong support: “I am at the NAPSA (North American Primate Alliance) conference in Tacoma and of course IPPL is delighted that Morocco and the EU have proposed the elevation of the Barbary macaque to Appendix I of CITES. There are less of them in the world than there are humans in the small town where I live!”

Dr. John Cortes, co-editor of The Barbary Macaque: Biology, Management and Conservation (2006) has been a long-time defender of the species: “I fully support and endorse the proposal. As Minister for the Environment in Gibraltar, a range State for the Barbary Macaque, and familiar with the species in North Africa, I agree fully with the statement and its aims.”