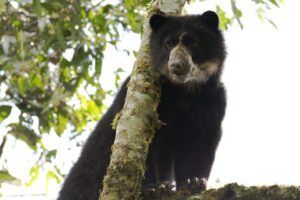 Campaign To Save ‘Real Life’ Paddington Bears In South America

The small bear, immortalised in Michael Bond’s much-loved Paddington Bear books, is the only species of bear in South America, is a CITES Appendix I listed species, the highest level of protection. However, local wildlife campaigners are calling for stricter enforcement following a series of recent bear attacks, and blame dwindling numbers of bear populations on human expansion, with Colombian farmers attacking the bears in an attempt to protect their livestock.

“If nothing is done to protect the Spectacled bear, it is likely that populations will decline by more than 30% within a 30 year window. It would be tragic if we become the generation who allow South America’s only species of bear die out. Head to the ADI website to see a new video of Spectacled bear Cholita, rescued by ADI, in her new home.”

It would be tragic if we become the generation who allow South America’s only species of bear die out.

ADI proposes to create a pact between authorities and social sectors to ensure the implementation of existing rules to protect Spectacled bear populations. This initiative was born in Colombia with the intention to expand into other South American countries with the presence of this species of bear.

“It is important to achieve national coordination to implement regional work plans and that this benefit populations to mitigate the impact of conflicts between people and wildlife “. The position of this environmental official in Colombia shows that the problem is not the lack of laws, but their enforcement. In this sense the proposed pact by ADI is essential that is signed by the environmental authorities, armed forces, local community, among others.

“We are invading the habitats of wildlife, this leads to the extinction of various species. As humans we must find a way to live peacefully with the other residents of this country, it is urgent to end the unjustified persecution to the spectacled bear.”

Earlier this year, ADI’s ‘Operation Spirit of Freedom’ campaign rescued over 100 animals from circuses and the illegal wildlife trade in Peru and Colombia, including lions, bears, tigers, monkeys, and others. ADI and the governments of Peru and Colombia collaborated for the unprecedented operation. Rescued animals were rehabilitated and rehomed to natural habitats.

Among the 100 rescued animals was Cholita, a 25 year old Spectacled bear, who was torn from the wild as a baby and mutilated and abused in a circus. She lost almost all of her hair due to stress. ADI rehabilitated her at their rescue centre and thanks to a very successful campaign, Cholita now lives in a large habitat funded by ADI supporters at Taricaya Reserva Ecologica, in the Amazon Cloud Forrest. Cholita was then joined by two other Spectacled bears, Lucho and Sabina, and ADI hopes another can join them.

ADI is now appealing for funds for the rescue and lifetime care of another Spectacled bear, 11 year old female Dominga, who, like Cholita, has lost her fur due to stress. Dominga currently resides in a small zoo in the Andean mountains. The zoo are prepared to give Dominga over but ADI cannot rescue her until they raise transport funds estimated at £10,000.