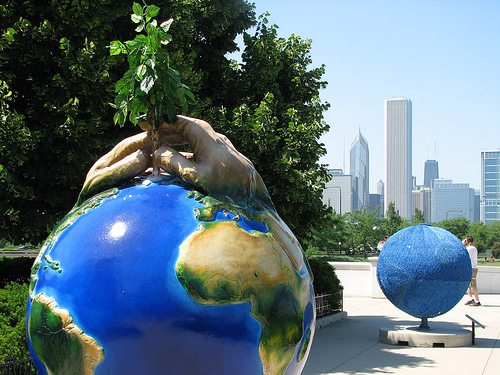 “What gets measured gets managed”, is an often-quoted phrase in business. In other words, putting a certain activity under the microscope can help you to make it better. This old adage rings true today in the sustainability world.

Business is changing. Profit is no longer the only measure of success. While some firms are of course stuck in a business-as-usual cycle, there are major brands out there at the leading edge of social and environmental awareness.

Marks & Spencer, for example, with its Plan A initiative. Launched in 2007, the retailer initially set out 100 sustainability commitments that it said it would achieve in just five years, covering issues such as climate change, waste and its use of natural resources. This ambitious target has since been expanded to 180.

Then there’s BT, whose recently-unveiled Net Good framework aims to help its customers reduce their carbon footprint by “at least three times” its own emissions by 2020.

Other firms such as Procter & Gamble, Walmart and Unilever are also among those famed for their leadership in sustainability.

What links each of these five names, and countless others, is a sense of social and environmental sustainability. But these guys are not treehuggers; they’re doing what they’re doing because it makes financial sense. While reducing carbon emissions and cutting down usage of precious natural resources is a clear and valuable by-product of their actions, they’ve realised that being sustainable saves them money in the long-term.

Gone are the days when business doing good for the planet and its people (or more to the point, not doing bad) was seen as solely for the sandal-wearing folk among us. Some of the biggest brands on the planet are clearly switched on to this message. But there are issues attached.

It’s easy to pull up these sustainability leaders for various misdemeanours. And campaigners do an excellent job of bringing certain issues into the public eye.

Walmart’s recent annual general meeting, for instance, was targeted by protesters over poor wages and working conditions for employees in the US and overseas. Meanwhile, Procter & Gamble has been criticised for price fixing and animal testing in the past.

And greenwash does happen. You simply have to look at oil giant BP’s role as the official sustainability partner of the London Olympics in 2012 to see that. But what sets these brands apart from their competitors is their comparative willingness to clean up their act.

The same applies in the investment world. Ethical investment funds are often criticised for investing in potentially unethical or unsustainable companies. One of the perils of negative screening on areas like tobacco, armaments and pornography is that you can allow mining and fossil fuel firms into your portfolio. This causes the sector to receive quite a bit of flak.

When a number of employees at pharmaceuticals giant GlaxoSmithKline were accused of large-scale bribery in China in July, Blue & Green Tomorrow went straight to the investment house Alliance Trust, which holds relatively large stakes in the firm, to see whether it would be considering pulling its investments. Analyst Mike Appleby responded with an impeccable justification, saying, in short, that it will carry on investing in the firm as long as it continues to prove it is committed to cleaning up its act.

Progress is what responsible and sustainable business is all about. Dedicated ethical brands such as Ecover and Traidcraft are truly excellent organisations – with sustainability embedded at the very heart of their business – but we need the big boys on board to see real change.

What tends to be the case in many large businesses – and this is going from anecdotal evidence only – is that the chief executives get the sustainability message; and so do the employees nearer to the bottom. But it’s the middle managers calling the shots on an everyday basis who fail to look at anything but the number at the very bottom of the table in the financial report.

Corporate social responsibility may have passed its sell-by date in modern day business, and Michael Solomon, director of Responsible 100, pondered this very question in an excellent two-part investigation for Blue & Green Tomorrow in April (part one and part two). What truly matters is good, responsible, ethical and sustainable business practices.

But for consumers and other businesses, quantifying which names are actually leading the sustainability push is sometimes tricky. The five brands mentioned at the beginning of this article are some of the leaders, but only because they are relatively vocal about their commitments to change.

This is where Amee comes in.

An acronym for the no-holds-barred Avoiding Mass Extinctions Engine, Amee (pronounced ‘Amy’ and stylised as ‘amee’) was set up in 2007 and provocatively states on its website that it has “the fundamental belief that intelligent businesses who adapt will thrive, those who don’t will become extinct”.

“In 150 years of accounting standards, people are used to benchmarking financial results. We want to bring in environmental results.”

Amee has a database of 2.8m companies in the UK, which it uses to put together environmental risk profiles. These include a firm’s carbon emissions, its water usage, its energy usage and more. Through its website, amee.com, you can search for pretty much any major brand and find out its environmental score (out of 100) and its financial score (out of five).

Of course, as the Amee platform grows and becomes more popular, there could be a real reputational risk for the companies involved. Being found consistently towards the bottom of such a comprehensive environmental database would be tricky for even the best PR departments to justify. However, the Amee team say it goes much further than reputation.

“We’re making sure that the models that we use and the data that we collect blend together in order that we understand firstly what a company’s emissions are”, says executive vice-president Paul Charmatz.

“We’re inviting them to update those emissions to make them better. We’re looking at the information that is available publicly to put into the database, and then we have objective views on how much somebody’s emissions are, and more importantly, how they compare to similar companies.”

He adds, “It’s gone past reputation. We’re really bringing this data to the chief financial officer in a business. This can be real risk.”

In 2011, Amee was one of only eight UK companies to be named in the Global Cleantech 100 – a list that details the most promising companies in the clean technology sector. It has worked with the likes of Google, Morgan Stanley and the UK government, and by bringing tangible, measurable environmental data into the public domain, its platform can spread the sustainability message.

The firm recently announced a partnership with the Foreign and Commonwealth Office – its second contract with the government – in which it will be helping to improve public sector efficiency and seek out supply chain risks.

To go back to the quote at the beginning of this article – “what gets measured gets managed” – this is fundamental to sustainable and responsible business. We now have the means to see which firms truly mean what they say when it comes to sustainability, energy and the environment. And as consumers, investors and businesses, the responsibility is passed onto us to make more informed decisions about what we do.