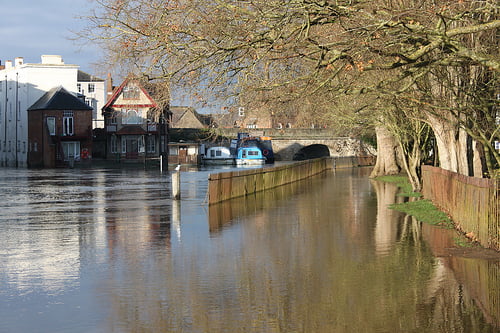 After the snow, the floods

The snow was bad. Now millions of gallons of meltwater will add to the heavy rain falling on waterlogged ground during a spring tide. Our weather-battered island is exhibiting the first serious symptoms of climate change, and it’s only just begun.

With over 50 flood warnings and 219 alerts, the snowfall of January is being followed by a rapid thaw and heavy rain.

Mayor of London Boris Johnson (BA classics, Oxon) may be an “empiricist” who has seen a little snowfall and concluded climate change is a myth. Rupert Murdoch (BA politics, philosophy and economics, Oxon), the chief executive of the discredited News Corporation, may have observed the same in New York.

Tragically, these two powerful but misinformed men, who met the other day for another Mayfair lunch, wield great influence with very little understanding of climate. Degrees in classics and PPE are not the typical academic framework for a deep understanding of complex climatology.

Serious people never confuse weather (the relatively predictable short-term state of a region’s atmosphere – rain, dry, wind, etc.) with climate (the long-term non-linear and hard-to-predict behaviour of the entire ecosystem). We would argue that you need to be qualified to talk about either in anything but the most trivial terms, e.g. “looks like rain again”.

Serious people do not take the views on climate of newspaper columnists/prime ministerial wannabes and discredited newspaper proprietors seriously. Science is for scientists – making credible policy after accepting the consensus, science is the role of the public and their elected representatives. Ideally after an informed debate and without the malign influence of a misleading press.

Our weather is certainly becoming more erratic due to climate change. Watching the weather switch from drought to flood in 2012 would have been exciting for the weather-obsessed British had it not proved so costly and fatal.

This shift in our benign climate to one that is more extreme poses a threat to our businesses, homes, public services, utilities, food supplies and life.

Our country’s addiction to building on flood plains while cutting budgets for flood defences exacerbates the problem. Building on, and asphalting, every open area has diminished the ground’s role in absorbing water and increased pressure on our leaking and stretched drains.

The cost of flood defences (£800m) is lower than the costs of floods (£1.4 billion) today and also over the long-term. But costs are predicted to rise regardless – the question is by what degree. The Department for Business, Innovation and Skills notes, “An integrated portfolio of responses could reduce the risks of river and coastal flooding from the worst scenario of £20 billion damage per year, down to around £2 billion in the 2080s. However, this would still be double present-day damage.”

There is some evidence that groundwater levels are affected by the moon, in the same way that our seas are. These table water tides mean a full moon, which takes place every month, will exacerbate floods. As New York discovered during Hurricane Sandy, you only need a few above-average natural events to coincide for the effect to be devastating.

The issue for our country is resilience – the ability to return to the original form after being bent, compressed or stretched. Most systems, whether man made or natural, have gradually evolved or engineered-in resilience. We have pushed our country’s natural resilience to breaking point and our manmade defences are not equipped to take up the slack. Systemic failure seems inevitable; in fact some would argue failure occurred in 2012.

Imagine the UK after 10 more years of extreme weather, which is more extreme each year, and you get a sense of what needs to be done.

A little snowfall always goes a very long way to bringing the country to a halt, as we’ve seen over the last few weeks. A heavy snowfall always will. Heavy rainfall now does the same. It can only get worse unless we act, and act dramatically, today.

Predictions of the rate of climate change have been proved wrong. The changes are happening more rapidly, the rate of change is accelerating due to negative feedback loops and the effects are becoming more pronounced.