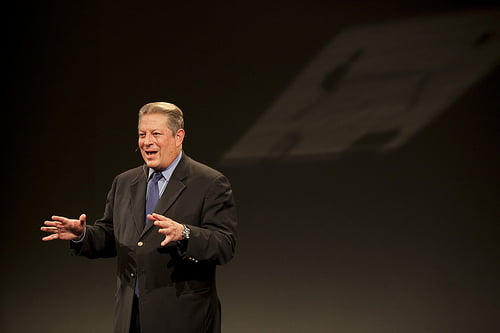 Tim Dieppe, partner and fund manager at WHEB Asset Management, describes a recent experience that saw him in the audience for a talk from former US vice-president Al Gore – one of the most environmentally-minded politicians there has ever been.

I attended a talk by Al Gore last week hosted by ShareAction (which recently changed its name from FairPensions). To my surprise, he described it as: “the most important talk I have ever given.” His mission these days is to promote a shift to a more sustainable capitalism – clearly a subject he is passionate about.

He discussed the pros and cons of capitalism, which are well rehearsed: capitalism, said Gore, is the least-worst system there is. It promotes the greatest freedom, harnesses the best of human capacity for innovation, and is at the base of every successful economy in the world today.

But there are some cons. First: increasing inequality. Gore highlighted that inequality is a necessary condition of capitalism. But likened it to inflation – you need to have some, but you don’t want the hyper-variety.

He stated that since the recovery in 2009, 93% of the additional income from GDP growth in the US has gone to the richest 1% of the population. This is clearly not sustainable capitalism.

He then spoke of increasing volatility in markets as an issue that needs addressing. He used the sub-prime mortgages as an example of a failure of capitalism and went on to discuss the misalignment of incentives.

Policymakers and economists focus on GDP which does not capture many important externalities – such as pollution and the benefits of the arts. He said that we are treating the atmosphere as a sewer and that all the carbon assets on balance sheets of major corporations today are sub-prime.

Climate change is happening and is already costing billions of dollars as we respond to ‘freak weather’ events. His film, An Inconvenient Truth, was criticised for scaremongering by postulating that seawater could reach the former site of the World Trade Centre – well it happened last year. Meanwhile, no journalist asked a single question about climate change in the televised presidential debates for the US elections.

Gore wants to see the mainstreaming of sustainable capitalism. This involves integrating environmental, social and governance (ESG) factors into stock analysis and engaging with companies about sustainability issues. It also involves everyone thinking more long-term about their businesses and investments.

What we have today is a system of ‘quarterly capitalism’ where 80% of CEOs would turn down a project that would clearly build long-term shareholder value if it risked causing a miss on quarterly earnings. As Gore said, “The way markets are operating today is functionally insane.”

I hope Gore is in this for the long-term, as the mainstreaming of sustainable capitalism will take some time to achieve and more than one talk to a largely already converted audience. He should aim at some of those CEOs and mainstream fund managers. I also hope that this was not ‘the most important talk of his life’ – rather, that there will be many more important talks to come.