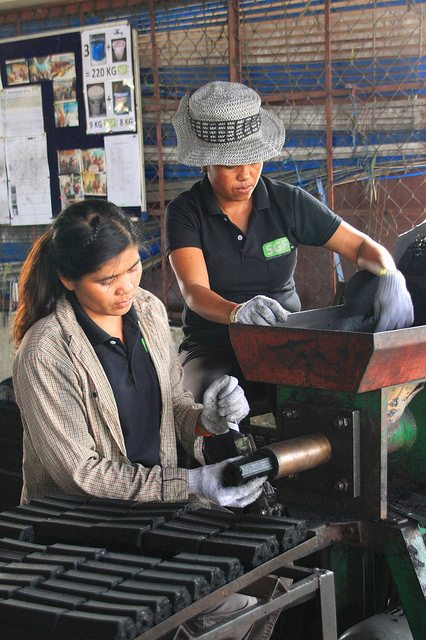 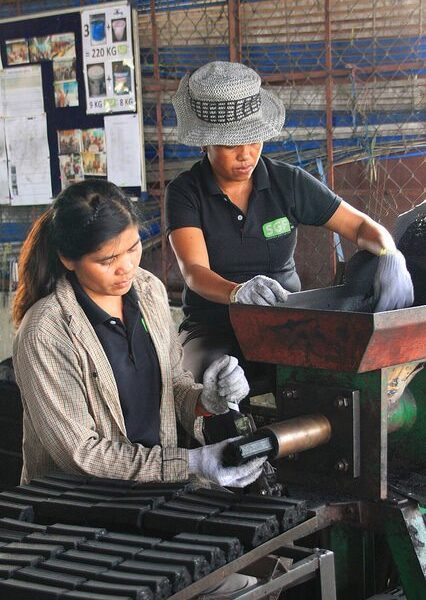 The Ashden Awards uncover and reward sustainable energy pioneers in the UK and across the globe, to date it has given out 170 prizes. Sustainable Green Fuel Enterprises (SGFE) was one of the five international winners in the 2014 awards.

– 80% of Cambodia’s population use wood or charcoal for cooking.

Background
Cambodia has one of the worst rates of deforestation in the world. Most Cambodians cook on wood charcoal, which contributes to the country’s rampant deforestation and air pollution.

Sustainable Green Fuel Enterprise (SGFE) is turning leftover coconut shells and char from wood-fired electricity generation into clean-burning briquettes for use as cooking fuel in Phnom Penh’s homes and restaurants.

The company was started in 2008 by environmental NGO GERES and youth welfare NGO Pour un Sourire d’Enfant. After working as a consultant to SGFE since the outset, Carlo Figá Talamanca took over as CEO in 2012, from which time it has achieved continued growth. As at January 2015, over 1000 tonnes of briquettes have been produced to date, and production is increasing rapidly: 47 tonnes produced in January 2015 is equivalent to the cooking needs of about 1,250 households.

For SGFE’s customers, using briquettes means less health-damaging air pollution, as well as more money in their pockets. SFGE is also playing its part in cutting deforestation: about 10,000 mature trees have been saved to date.

SGFE won the 2014 Ashden Award for Avoided Deforestation, supported by The Waterloo Foundation.

SGFE’s clever production of char from waste makes briquettes that are a real hit with cooks, as well as cutting deforestation and air pollution.


Progress since its Award

With double the production capacity SGFE will be intensifying its marketing and sales efforts to reach sales of 100 tons/month by the end of 2015, equivalent to the cooking needs of about 2,500 households. SGFE is also planning to further increase production capacity by building a new factory, as well as investigating diversifying into other products relating to clean cooking, like improved cookstoves or pellets.

Find out more at http://www.ashden.org/winners/SGFE14