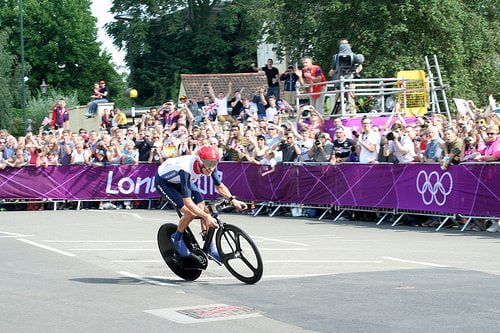 Last week’s ‘joke’ at a children’s charity ball was not Sir Bradley Wiggins’ finest moment. But cast your minds back a year and the reason for his knighthood is quickly remembered. Just 10 days after becoming the first Brit to win the Tour de France, he won his fourth Olympic gold medal. So dominant was Wiggins that many questioned just how he did it.

We didn’t need to wait long for an answer. In the wake of victory, Team GB’s performance director David Brailsford explained the philosophy of “marginal gains” behind the team’s success: “If you broke down everything you could think of that goes into riding a bike, and then improved it by 1%, you will get a significant increase when you put them all together.”

As a method of improvement it offers no quick fix. Based on hard graft, trial-and-error and incremental steps forward, the process was not exciting, but the results proved glorious.

And this applies to renewable energy technologies as much as it does to sport.

A model of innovation for renewable energy

Over the last two decades we have seen extraordinary improvements and cost reductions in wind and solar power technologies – such that they are now moving rapidly from fringe-player status to major challengers to the status quo.

Like Team GB’s success, this has not happened through spectacular leaps forward. Improvements have been incremental rather than radical, and they have happened as thousands upon thousands of wind turbines and solar panels have been designed, manufactured and erected in subtly different ways over time.

The need to actually do something so that we can learn from it and do it differently next time lies at the heart of the innovation process. It is the reason wind turbines have reduced in price by 7% for every doubling of the number made. This phenomenon of cost reduction driven by ‘learning-by-doing’ holds true time and again across varied technologies and industries. However it doesn’t just happen on its own.

When new technologies are first developed there is often no way they can compete unassisted with incumbents, even if their long-term potential is to be cheaper, cleaner and better. Without extra financial support from government in the form of subsidy, they simply wouldn’t get built. No learning would be possible. Innovation wouldn’t happen. Costs wouldn’t come down.

Ask yourself, could Team GB have made all their incremental improvements if they were never allowed on their bikes? In the same way, getting renewable technologies deployed in large numbers is key to their ultimate success.

Such support is especially warranted when it comes to our energy system, because no level playing field exists. Fossil fuels generators, for example, have had over 100 subsidy-fuelled years to bring their own costs down. Our grid was built for big power plants not dispersed renewables. Our market fails to price the cost of environmental damage. The list could go on.

Of course subsidies shouldn’t carry on for ever. They should reduce over time as innovation pushes costs lower, exactly as is happening at the moment with wind and solar power.

But why is it important to make these points right now?

A risky idea, detached from reality

Because once again in recent weeks some high-profile figures have argued against support for our most advanced renewable technologies like wind and solar.

Two weeks ago, for example, Danish author and self-proclaimed ‘sceptical environmentalist’ Bjorn Lomborg suggested on BBC Radio 4 that rather than subsidising our current “inefficient” renewables, we should put our money into researching and developing a new generation of low-carbon technologies instead.

He is in effect arguing for a very different kind of innovation – a ‘disruptive’ innovation, capable of delivering new technologies so superior that they can outcompete incumbents almost instantly without support. But this is a risky idea that is detached from reality.

It is risky because it would mean halting the rapid progress of our current renewables whilst we “wait for a magic pill to cure our climate woes”. And it is detached from reality because it ignores how most innovation actually happens through incremental improvements and a lot of hard-graft.

None of this means that disruptive innovation isn’t important. It is. And none of it means we shouldn’t increase research and development funding for early stage cleantech. We should. But to bet the farm on an unknown and ignore what we already have would be a disaster.

Now is not the time to abandon the innovation that has served Britain’s cycling team, and our renewable energy technologies, so well.

Governments must ‘get’ sustainability to truly capitalise on UK innovation