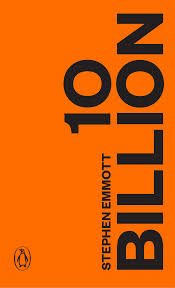 Stephen Emmott, head of computational science at Microsoft Research, clearly and simply spells out some of the world’s most pressing problems in 10 Billion.

Emmott has previously lectured on the subject of climate events and population, which was one of the Guardian’s best theatre events of 2012, demonstrating how compelling the topic and Emmott’s style is.

10 Billion is short and accessible and specifically written in a format that everyone can understand, free of jargon and technical terms. The pages are uncluttered, with some just containing a single sentence, allowing readers to focus on what is being said. Graphics and photographs are used to aid understanding and highlight points made in the book.

The book argues that we are approaching a tipping point, where the population will have grown to unsustainable proportions placing pressure on resources, and that the world needs to collaborate across all areas in order to have an impact.

The topic is hugely relevant as the effects and risks of climate change become more apparent, by 2100 our species is likely to reach 10 billion, a 10-fold increase compared to 1800.

The pessimistic tone and findings of the book make for a shocking and informative read. 10 Billion is eye-opening and a highly recommend read.