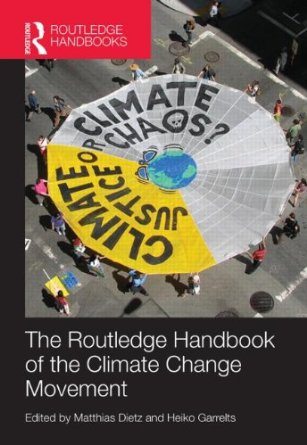 The upcoming Routledge Handbook of the Climate Change Movement aims to provide a comprehensive overview of the rapidly growing international climate change movement.

It offers readers a broad analysis of the current climate change movement and focuses on both climate politics and civil society, giving readers a dual perspective. The positive impact that the movement can have on the world and changing environmental politics is demonstrated.

The movement is examined as a whole in order to captures its “scope, structure, development, activities and influence”.

The book also assesses how the movement is developing in different areas and compares how it is evolving. For example, it looks at the differences between developed and developing nations and how they respond to the threat of global warming and the contrast of the movement in small and large countries.

It also examines where the movement is heading and what its future prospect may hold.

The book is split into three parts, with each containing numerous chapters, allowing readers to fully understand the content and easily find the sections they are interested in.

A wide range of contributors have supplied information for the book including academics and activists.

The handbook is designed to be accessible and will help readers understand what the movement is, how it is developing, and what it is achieving.

The Routledge Handbook of the Climate Change Movement is available to purchase from December 18.