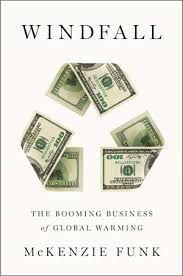 Journalist McKenzie Funk takes a unique look at climate change and investigates the businesses and entrepreneurs that are coming up with solutions to help them profit from the impact.

Windfall is a collection of anecdotes from around the world and explains how everyone is and will be affected by climate change. However, whilst many will suffer, as a result some will benefit and see profits soar as their solutions become needed and new resources open up.

The author breaks the effect of climate change down into three areas: the drought, the melt and the deluge. He then looks at the businesses involved in each and how they will profit from the outcomes.

He also looks at the companies that have factored the effects of climate change into their plans. This includes oil exploration companies who have spent decades planning and preparing, with the anticipation that melting ice will open up ‘new’ resources.

Another example is that parts of Africa are also being rapidly bought with the expectation that as the effects of climate change take hold, they will become valuable pieces of land for farming.

The book also examines what will happen to those in the areas that don’t benefit – mainly countries in the south – and the suffering they can expect as they become climate refugees.

The author doesn’t look at the science behind climate change, arguing that this has been covered before. Instead, he looks at the cost of adapting and offers an insight into human nature as the people interviewed talk about how to survive the affects rather than solve the cause of the issue.

Despite the topics being discussed Windfall is fun, engaging and easy to read as well as offering a different and compelling perspective to the climate change debate.