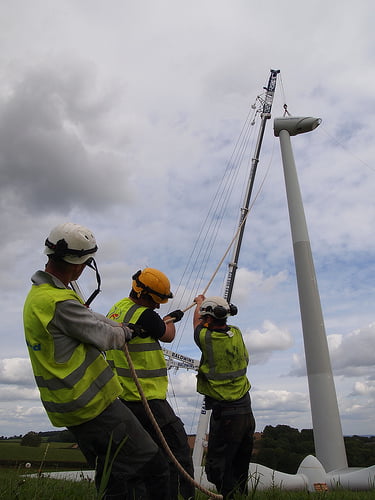 After helping launch peer-to-peer lending site Zopa 10 years ago, Bruce Davis is now co-founder of renewable energy platform Abundance Generation. Here, in an extract from a recent talk, he looks at why alternative finance is better for everyone.

It’s surprising how long it’s taken for people to get the idea of putting their money into an institution that’s trying to do something different with money. People who don’t follow the herd, or go to the nearest bank, or follow what their parents did.

About 10 years ago, when we thought of Zopa, we were talking in a barn somewhere, and thought, “Can we do this lending and borrowing thing without the need for a bank?” We didn’t used to have banks that managed all our lending and borrowing. Could we make that the norm again?

So we came up with this idea about eBay for money. At that point, it was much easier to get funded to do crazy stuff, because it was 2004 and there was a lot of cash around. So we got given a lot of money by venture capitalists to create Zopa.

Zopa now has done nearly £300m worth of lending and borrowing between individuals without a bank, and has the lowest bad debt rates in the world. It has been created out of a desire to say, “We can do something different with money.”

Quite often, we talk about freeing up money, and actually, we need to free our minds when it comes to money. Zopa is a good example of what you can create if you don’t allow economists into the picture.

The really big thing that people are beginning to realise is that economists don’t have all the answers. Economists are really good at telling you what happened; they’re less good when they start using crystal balls.

No economists actually predicted the crash. Quite a lot of anthropologists did.

But of course, you were a bit of a nutcase at that point if you were telling people the financial system was somehow bad. You were probably a socialist.

I have a very strong view and that comes from the first time I went into a home to look a people’s money. Money was not explained by economists. It was social; it was cultural. Everything that was happening was counter-intuitive and rather challenging if you’ve been working in a bank.

It’s quite important because if you realise that, you realise you can take back ownership over your money. You don’t have to give away ownership. That’s a really powerful thing about the mutuals and other forms of direct finance.

You maintain that sense of ownership over what your money does and where it goes because you’re a member.

On the other side of it, unsustainable lifestyles are sustained by this idea that we can have this sort of market that can grow forever.

Free markets are based on the premise that we can have growth forever, unrestrained, and that’s a good thing. That’s a myth – and one that has a very powerful idea in it about freedom and autonomy, and it’s pinned on something rather silly that markets are somehow a natural phenomenon. That we evolved these things and therefore we should just use them.

Having created Zopa, you can just create markets out of thin air. That’s largely what we did. We invented markets, so you can reinvent and change them.

To misquote someone who died recently, “There’s no such thing as markets; there’s only humans and social relations.” I think this is very important, and we probably lived for 20-25 years thinking the opposite, because actually, it’s society that creates markets.

We make the markets we deserve; it’s not the other way around.

But at the moment, we have this idea that markets make society; that markets will make a fairer society, and that’s just patently not true. The more we create markets, the more inequality we have, the less fairness we have, and the fewer good things we do with money.

So in a sense, the idea that ‘greed is good’ needs to die. We need to move on from this idea, because strangely enough, greed is only good for the greedy. They’re the people who win.

When we created Abundance, we were trying to think of ways that would complement what building societies had done in the previous century. Something akin to a building society, but with slightly different mechanisms and approaches that took advantage of technology and changes in the way you could build businesses. A building society for the 21st century was how we kind of started out.

We were frustrated with the structures and hierarchies of financial institutions that meant that that if you create a bank, you start acting like a banker almost by default. You get told to act like a banker by the regulator.

We saw companies like Ecology Building Society, Triodos and the Co-operative showing that you can do things within the current system; but do it better. So Abundance is a response, within the investment side of things, that we can do it but do it better.

And we don’t have to use the same assumptions as we did before.