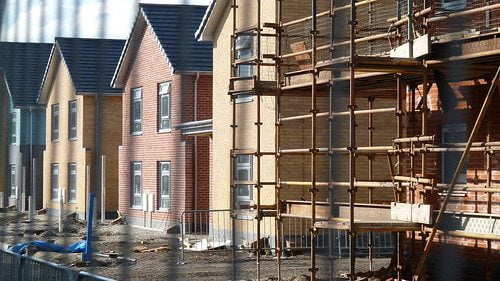 Building the eco-friendly homes of the future

The UK is in desperate need of new homes. Official estimates suggest that about 300,000 properties need to be built every year to keep up with demand, yet this is a rate that hasn’t been achieved in the UK since the 1970s and is two to three times the current level.

It’s a topic that is constantly on the political agenda, with the Telegraph recently revealing that the Government hopes to plug some of the gap with a round of modern day ‘prefabs’.

Yet with the scale of the housing shortage, it’s clear that there isn’t just one solution – there needs to be lots of different methods encouraged. A mass housebuilding programme does provide an opportunity, as well as a challenge.

While the housing crisis might be one of the issues that defines the next generation, the future of the planet is pretty important too. In Paris last year, countries from across the globe signed up to legally binding emissions targets, in an attempt to tackle climate change.

Is it possible to kill two birds with one stone?

According to some pioneers, it really is. There are some people who have been able to build homes that are so efficient that they not only produce enough energy for the people who live inside – but also some extra to ensure that the occupants get paid for contributing to the National Grid.

A community of two and three-bed social housing bungalows known as Unity Gardens in Long Sutton, in Lincolnshire, showcases how this bill-free world can become a reality.

These award-winning homes were the brainchild of eco-architect Dr. Jerry Harrall, who said: “If you wondered whether or not it is possible to design a building where, on an annual basis, you have no energy bills and no heating bills then the answer is yes, I have done it. We have clients who are living the dream.”

Residents in Unity Gardens use less than half of the energy of people in a standard UK home and generate about 1,500kWh more than they use.

This is achieved through smart design and the use of the right materials.

The homes are made with earth bunding for insulation, generate their own energy using a solar panel and wind turbine and deploy heavy materials to ensure the floors and walls can double up as storage radiators. They face south to soak up the maximum amount of sunshine and the most natural heat and light possible.

Unity Gardens proved the perfect starting point for one couple, who used the money they saved living there to build their own eco-friendly home.

Andrew and Jo Thompson tapped into the design knowledge of Dr. Harrall to build ‘Frankly Bee’ just down the road from Unity Gardens in nearby Sutton Bridge. The property cost just £100,000 to build and last year they not only had no energy bills, but they also received £365 for the energy they created.

Jo told the Spalding Voice: “I’m really proud of it and really pleased with the outcome. People need to know that they can do this too. If we keep buying these cardboard houses, nothing will change.

“It’s not hard, it’s not difficult – we just need to change the way we think. We chose this shape but you can make it how you like. You just have got to get the build right. We’re starting to reap all the benefits and not by the skin of our teeth. We’re a long way into making money.”

Dr. Harrall said the Thompson’s home also tapped into the research of Brenda and Robert Vale – forward-thinking pioneers who have inspired his own work over the years.

He added: “Frankly Bee really is the pinnacle of that evidence-based research.”

Not everyone matches the sorts of low energy feats managed by the Thompsons, but there are many people who are embracing green features into their homes to slash their bills drastically.

Indeed, building your own home might well be seen as the ultimate DIY project. With the right support at the planning stage and the right materials from the likes of Ken’s Yard – making your own home can be one of the most rewarding challenges to take on.

Mark and Sheila Hemingway are one couple that did just that. They led the project to build their new four-bedroom home in Northamptonshire, with support from self-build specialist firm Potton.

Their home features an air source heat pump, rain harvesting system, LED lights and a mechanical ventilation and heat recovery system. As a result, bills are a couple of hundred pounds below the £1,200 average and they get the Government-support subsidy knows as the Domestic Renewable Heat Incentive, which is worth £678 a year for seven years.

Mark said: “The temperature in the house is consistent at 22 degrees celsius. This is due to the insulation and re-used fresh air. There are no radiators and the downstairs of the house is all underfloor heated.”

“We’d not go back to a standard home now. We would definitely build an eco house again or retrofit a new one with eco modules.”

Yet, while the Hemingways and Thompsons of this world should undoubtedly be encouraged in their endeavours, it’s unlikely that the scale of the crisis outlined at the start of this article will be overcome by relying on individuals.

Yet, that’s where Dr. Harrall might have the solution. His next project is for 14 homes including one property that he boldly predicts will be the ‘most energy efficient home in the country’.

From there, he’s currently on the hunt for investors to back a new business – Indie House – that could deliver 2,000 homes in six years in the Peterborough area. If successful it would be the largest portfolio of its kind in the country.

Dr. Harrall said: “The business model is very smart and these are not estate developments. We are not building the ghettos of the future. These are houses that use no fossil fuels.”

Two birds with one stone indeed.