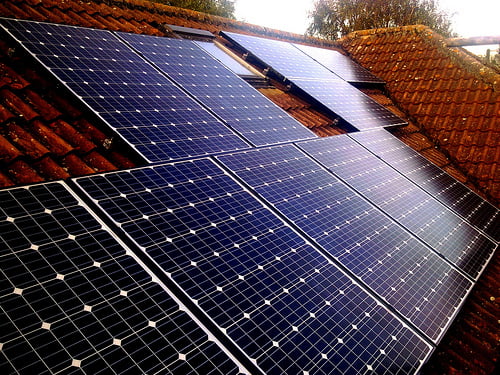 “Somewhat smug” solar array owner Gavin Smith describes his experiences with the Feed-in-Tariff scheme and its significant impact on his decision to invest. But is the party over?

Michael Beard, the anti-hero of Ian McEwan’s timely 2010 novel Solar, ultimately sees the light despite wasting his scientific genius and bingeing his way to flabby dissolution.

The light in question is the virtually infinite stream of particles showered onto us by our local cosmic fusion reactor, the Sun. Michael Beard sees a human race thirsty for the energy that falls in dazzling abundance around them. Yet, so addicted is humanity to excavating the carbon-locked energy of eons past, it insists on failing to see—or at least seize—the light.

I’m the somewhat smug owner of a 2.5 kWp roof-mounted, domestic solar array. I commissioned the system in time to grab the 43.3p/kilowatt feed-in-tariff (FiT) extracted by the government from the UK’s principal energy suppliers. The now expired tariff—in addition to a small but pleasing 3.1 pence per kilowatt ‘export tariff’ in recognition of our reduced consumption from the national grid—is fixed, for me, for 25 years.

On estimated and actual performance, I expect to recoup the £10,000 purchase cost in 10 years or less. I can reasonably expect the 15 years thereafter to be pure profit.

I submit quarterly readings from my generation meter to my electricity supplier and they duly stump up a pleasing amount of cash—in effect, purchasing a measured quantity of solar radiation from me. I’ve asked if they’ll buy some old rope I’ve found, but they’ve yet to reply.

I continue to pay my electricity bills in the usual manner—having a solar array doesn’t make you independent of the national grid. Not only do we live in a temperate climate, but the energy cannot currently be stored.

To use a water analogy, it is like collecting rainwater without a storage tank. What I collect flows straight into the national grid, unless we happen to draw electricity while the panels are working. On a sunny day, we use less juice or none at all from the national grid. This inverts the old economy of running more appliances at the ‘night rate’ of yore.

Indeed, while our electricity bills have shrunk, in the absence of batteries it remains the case that we are both a buyer and a seller from the utility company’s point of view.

Yet, in getting to this stage, I gained an insight into the piecemeal, stuttering and arguably chaotic shape of the government’s approach to renewable energy. I benefitted. Many did not. If we’re to get a grip on climate change, there needs to be a benefit for all.

I learned from the experiences of friends and relatives who lost time and money dealing with fly-by-night companies set up to cash in on the rush to grab the 43.3p tariff. When, at the end of 2011, the government was panicked into closing the tariff window early, the warping effect of irresponsible private sector exploitation became apparent.

For home-owners unable or unwilling to buy and own a system, they could get one for free. Their electricity bills would be slashed, but that was the end of the good news. The installing company retained the 43.3p per kWh profit, as well as ownership of the panels and an interest in the roof space the panels were bolted to.

This may well be a headache for householders who want to sell their homes, but it also meant that the whole scheme was being undermined. Many companies exploited a preferential tariff wholly intended for domestic users by creating what were in effect dispersed and over-subsidised commercial solar farms across thousands of residential roof-tops. The utilities and the government balked at the price. The party was brought to an end.

I picked a large, local electrical contractor whose solar business made up a relatively small part of its portfolio. I was confident they’d finish the job and wouldn’t disappear into the ether along with my warranty. Sustainable investment, for me at least, has to involve solid, trustworthy business basics.

The domestic scheme still exists, but the tariff has been slashed. Those prepared to wait 20 or more years to recoup their investment can still go solar. But I wouldn’t have joined on those terms because I’m just not that committed. The world may burn, but my car, holidays and video games won’t pay for themselves.

Policy-makers seem to be hamstrung, wrangling over whether nuclear or less controversial, renewable options should be aggressively pursued. Privately and publicly, some would favour both. Either way, the only product of the current political diffidence is faltering renewable investment and a continued dependence on fossil fuels.

In the meantime, domestic users are deterred or at least left with the impression that renewables are a gimmick unworthy of private investment. Many fledgling solar installers have gone to the wall. This doesn’t suggest we’re taking solar—or global warming—seriously enough as a culture. I don’t see big pharmaceuticals, oil companies and fast food giants tripping over their own shoelaces with such abandon.

Solar has to be the way forward. As solar photo-voltaic technology develops, it will only get cheaper and easier to hoover up the riches of solar fusion at all latitudes. Indeed, our high-end Mitsubishi panels are optimised for low light and cooler temperatures. They’re markedly better than the technology of five years ago, and will seem crude five years from now.

But it all has to be made worthwhile for the private punter. I found my window of opportunity but it was a tight squeeze. Many didn’t and perhaps never will.

Still, not to worry. What’s the worst that could happen?

Despite a good year for renewable investment in the UK, the impact of government FiT tinkering and a lack of commitment going forward will undoubtedly have a negative effect solar uptake. Gavin Smith, for one, would not invest in the current climate. A quick look at Google Trends tells the story very succinctly. UK searches for the term “solar panels” rose throughout 2011 to take advantage of the, in hindsight perhaps over generous, FiT scheme. At the end of 2011 though, as government announcements added confusion and doubt to the mix, it seemed as though the party was indeed over and only a lucky few had benefitted.

The real question is: can the message about climate change and energy security be made clear enough to counter the less generous FiT scheme? Blue & Green Tomorrow certainly hopes so. One way you can switch to renewable energy without directly investing in your own system but while retaining a clear conscience is by contacting Good Energy – the UK’s only 100% renewable energy supplier.