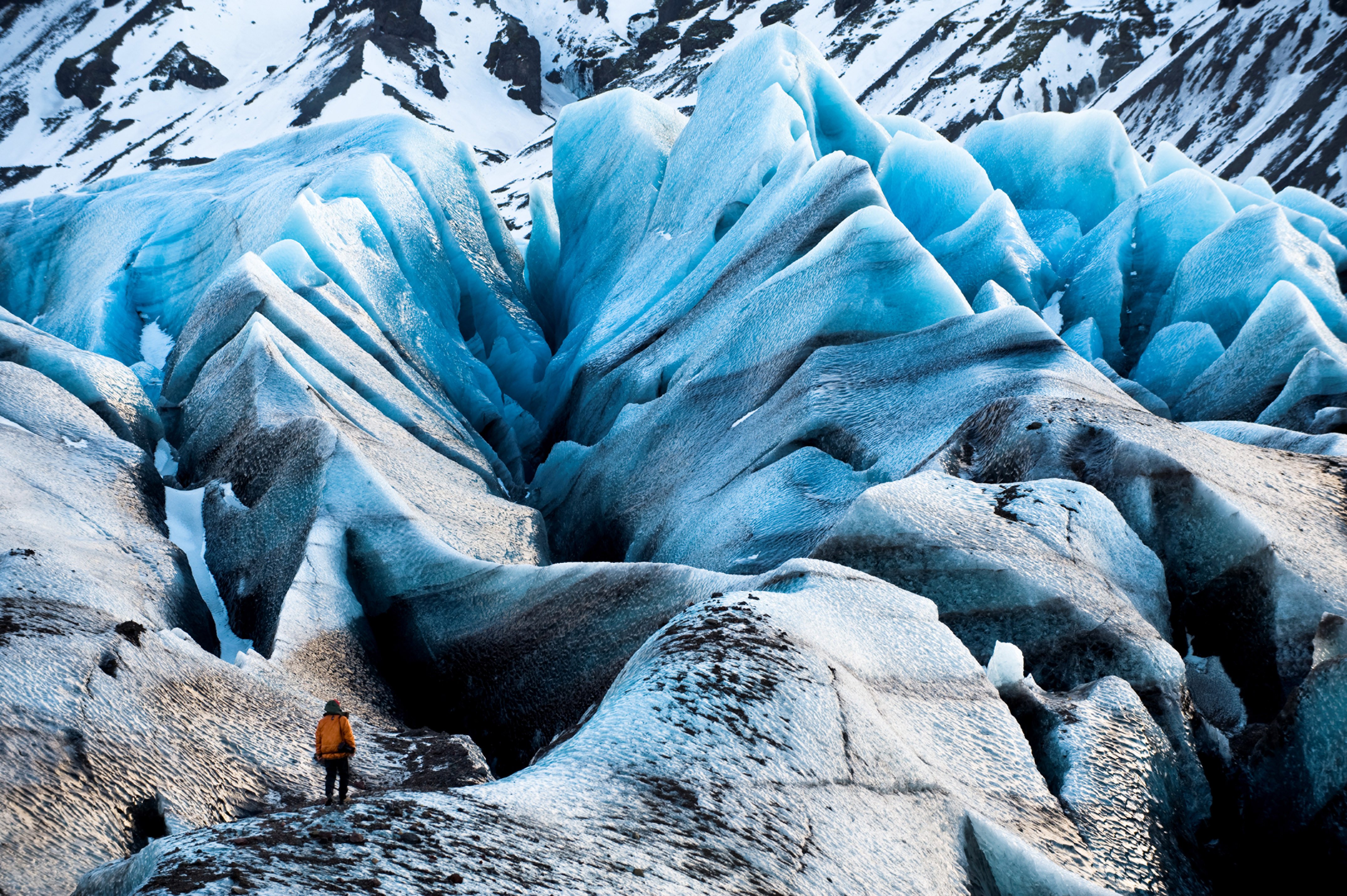 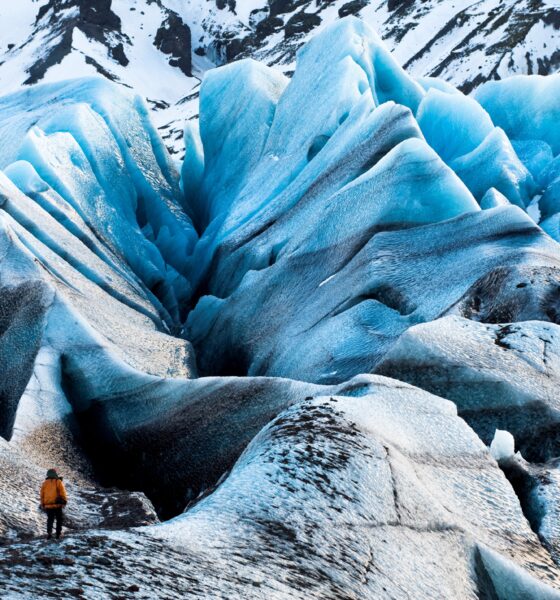 Photographer James Balog used to be sceptical about climate change. This was until 2005, when he was sent to the Arctic for an assignment. Capturing the region’s rapid disappearance on film became his life, and Chasing Ice, a 2012 documentary film by Jeff Orlowski, follows his ground-breaking journey.

“If I hadn’t seen it in the pictures, I wouldn’t have believed it at all”, says James Balog, sitting on the side of an Icelandic ridge, peering out over what remains of the Sólheimajökull glacier.

I call it a glacier, but it’s more of an icy rock when Balog returns in 2009 – just a year after installing a time-lapse camera at the scene to visualise its demise. Glaciers naturally advance and retreat depending on the season, but there’s no denying that this disturbing decline is not natural.

But Sólheimajökull is just one of a number of glaciers captured on film by Balog and his team in Chasing Ice – a documentary made by Jeff Orlowski which is set for UK release in December this year – and each one of them display equally worrying trends.

The film’s release is timely. Disturbing statistics released by the National Snow and Ice Data Center (NSIDC) in the US in August showed how sea ice cover in the Arctic had reached its lowest amount since satellite observation began in 1979. The data concluded that just 1.58m square miles was now covered by ice – 27,000 square miles less than the previous record, set in September 2007. This figure decreased even further as summer melting continued in the region throughout September.

Chasing Ice doesn’t only map out the decline of some of the world’s biggest glaciers; it also marks wholesale changes in Balog’s views. It’s hard to believe that the man on screen, who appears so passionate about documenting these pristine landscapes, was once sceptical about mankind’s impact on climate change.

A former photographer for National Geographic, he was sent to the Arctic on an assignment and was drawn in by the region’s dramatic disappearance. “I never imagined that you could see glaciers this big disappearing in such a short time”, he says in the film. It was at this point that he saw a powerful piece of history unfolding in his photographs. And he had to go back.

Bringing together a dedicated team of engineers, ecologists, filmmakers, researchers and glaciologists, Balog set up the Extreme Ice Survey (EIS) – a project that would help visualise the effects of climate change on some of the most vulnerable places on Earth.

EIS placed an initial 25 cameras in various locations around the world, and using solar-powered batteries, engineered them to take photographs every hour during daylight. The aim was to create a time-lapse video of each glacier’s retreat.

It’s difficult to comprehend through the medium of words just how powerful some of the footage is; glaciers retreating the length of nearly 300 double decker buses and areas the size of lower Manhattan being churned up in almighty calving event. All in a matter of years.

The most distressing scene appears towards the end. After Balog had unexpectedly witnessed a massive chunk of ice fall off a glacier while setting up one of the time-lapse cameras, he decided to send two of his team to Greenland to capture a calving session on video. They set up camp, set the cameras rolling and waited. And seventeen days later, it happened.

It was the biggest calving event ever to be caught on film. Footage shows blocks of ice 400 foot high being tossed around in a scene reminiscent of a Hollywood blockbuster. Tidal waves of icebergs come crashing through a sea of mayhem, as the 3 mile wide glacier retreats a whole mile in just 75 minutes. 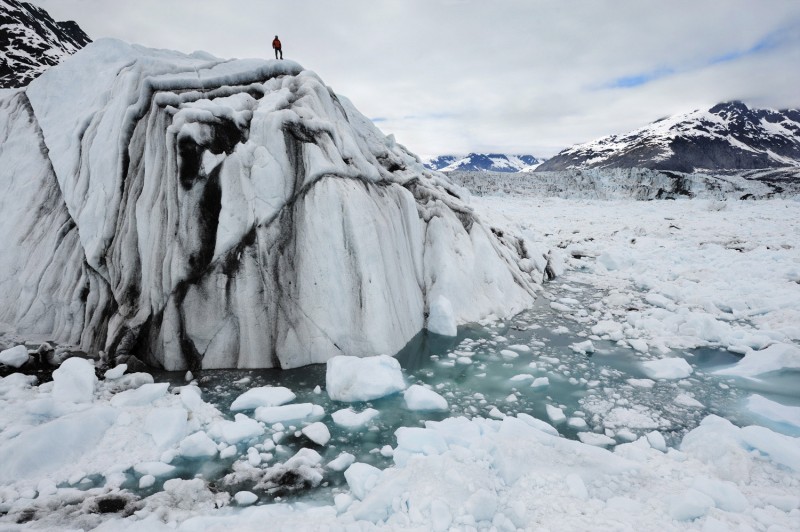 From this scene alone, it’d be easy to describe Chasing Ice as ‘just another doom-and-gloom, we’re all going to die, climate change film’. It’s not. The images captured by EIS are peculiarly beautiful and Balog’s approach to climate change is rational and inspiring, but above all, the impact of the film stretches way beyond film reviewers and cinemagoers.

Many of the world’s biggest and most profitable companies are oil and gas firms. And after providing much of the greenhouse gases in our atmosphere, which have caused places like the Arctic to diminish so extraordinarily rapidly because of climate change, these companies are now seeing the once unreachable regions as places to drill for more fossil fuels. Sadly, it’s irony of highest nature.

But with that, it seems only fitting to allow Balog to offer an encouraging thought at the end of this review, taken from a TED lecture of his in July 2009.

“I’ve come to the conclusion after spending a lot of time in this climate change world, that we don’t have a problem of economics, technology and public policy. We have a problem of perception. The policy and the economics and the technology are serious enough issues, but we actually can deal with them. I’m certain that we can. But what we have is a perception problem, because not enough people really get it yet.

“Fortunately, a lot of the political leaders in the major countries of the world are in an elite audience that for the most part gets it now, but we still need to bring a lot of people along with us.

“I believe we have an opportunity right now. We are nearly on the edge of a crisis, but we still have an opportunity to face the greatest challenge of our generation, in fact, of our century. And this is a terrific, terrific call to arms to do the right thing for ourselves and for the future and I hope that we have the wisdom to let the angels of our better nature rise to the occasion and do what needs to be done.”

Climate scientists are not arguing about global warming. There is no argument. The evidence is so compellingly clear that they are genuinely scared about the future of our planet. What our greenhouse gases are doing to vulnerable regions like the Arctic is an abomination, and the fact that the scientific consensus isn’t accepted by all is both highly mystifying and deeply worrying.

Chasing Ice is one of the clearest and most devastatingly beautiful pieces of visual evidence for climate change you’ll see. It deserves to be watched, absorbed and acted upon. I, like Balog, am optimistic of our chances.

Chasing Ice is out in UK cinemas on December 14.