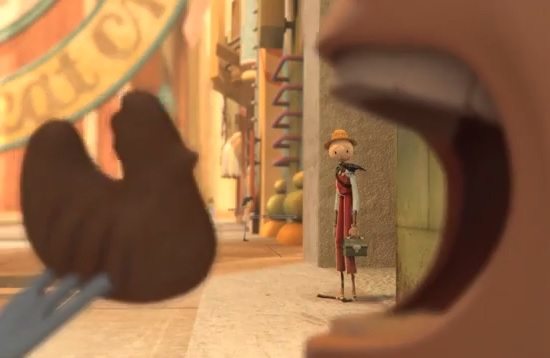 Earlier this month, restaurant chain Chipotle released a short animated video as part of the advertising campaign for its new game, available on Apple devices, called The Scarecrow. The film is about the industrialisation of food production and features farm animals being reared in small spaces and treated with hormones.

While the video is unquestionably clever and beautifully put together, and has received praise from the New York Times and fans on Facebook, it has attracted criticism from farmers and some news outlets.

News website Salon claimed, for instance, said that Chipotle’s video advocated a switch to a vegetarian diet, despite serving a large number of meat dishes in its restaurants. The reason behind this criticism is that the video contrasts cruelty to animals by a large corporation with smaller scale, idyllic, natural methods.

This criticism is interesting, but a bit inconsistent. Farming animals is certainly more problematic than growing vegetables because of the social, environmental and ethical costs involved. As the Salon journalist notes, no matter how animals are reared, it is still unsustainable to eat meat at current consumption levels, given the huge amounts of resources required for production.

It must also be acknowledged that most of the cereals and crops that are grown are not for human consumption, but are instead used to feed cattle.

An interesting point is raised by James Hambling of the Atlantic. He suggested that Chipotle was almost setting itself aside from big business, by implying that it wasn’t a multi-million fast food company with 1,500 restaurants and annual revenue of $800m in 2012 (and whose food, we should add, has been said to be excessively high in calories and fats in the past, worse than a Big Mac).

“For one, the scarecrow, when confronted with the financial obstacles to farm-to-table business models, will find it hard to compete with companies like Chipotle“, Hambling writes.

“I mean only to raise this question, but what is Chipotle claiming about itself here?”

With more than 1,500 locations across the US, the UK, Canada, France and Germany, and global revenues in excess of $2.7 billion in 2012, Chipotle is one of the most popular Mexican grills in the world.

In the early 2000s, the company decided to change its food sourcing strategy drastically, aiming to buy more organic and hormone-free animal products. It produced a  Food with Integrity statement, in which it explained how and why it had decided to switch to “more sustainable meat”.

However, while welcome, this shift towards sustainability perhaps falls a little short. Chipotle says it uses “naturally raised” meat, but doesn’t do so 100% of the time. The term “naturally raised” is in itself controversial and blurred. Animals that are raised on good plant-based diets, without hormones, could quite easily be raised in farms that keep them indoors, meaning they’re unable to express their natural behaviour and raising legitimate welfare questions.

The short film has upset the Nebraska Farm Bureau Federation (NFBF), which claimed that Chipotle had created misconception about farming practices in an attempt to scare consumers with “the myth of factory farming”.

An interesting statement, considering that around 70% of animals are estimated to be raised in this way, which makes it look like all but a ‘myth’.

Chipotle spokeswoman Danielle Winslow replied to the Journal Star, saying, “The film simply invites viewers to question where we are heading as a society, and to think more about where our food comes from and how it is prepared.

“The Scarecrow film is a symbolic cautionary tale that depicts a future world where all food is processed and the ingredients come only from industrialised sources.”

Despite raising important issues to do with sustainable farming and the treatment of animals, the question remains as to whether Chipotle’s video was a genuine attempt to raise awareness or merely clever marketing ploy (is this Funny or Die parody more accurate, perhaps?).

If the answer is the former, then the company should improve its efforts to become fully, not just partially, sustainable. If it is the latter, we have to sadly acknowledge that even clear sustainability intentions, it may still care more about the bottom line than it does about positive and sustainable change for the good of the planet and its people.

UPDATE: Blue & Green Tomorrow received the following comment from Edd Colbert of the Feeding the 5000 campaign:

“The video certainly shows two extremes of potential future food sources. Whilst I can understand why the NFBF would suggest the video feeds misconceptions about how food is grown, I would argue that this is no worse than the vast majority of agribusiness marketing that still misinforms and deludes consumers about where there food comes from (the use of beautiful pastures and red barns in agri-marketing are prime examples of this – imagine if businesses instead showed huge dry feedlots with no grass on the box for their burger!).

“I can’t personally stand up for Chipotle and defend them as a business, yet I admire them for producing some profoundly stimulating videos that alert people to the potential catastrophes ahead of us if we don’t change the way we grow, harvest, package, transport and eat food. This isn’t the first video they’ve made and I would urge you to have a look at some of their earlier stuff as well.

“The brand will obviously have received some very good publicity from this video, and equally from its criticisms. However, with the publicity there has also been the equal spreading of a very important message: our current food system is unsustainable and we need to radically alter the way in which we deal with food. This isn’t to say Chipotle are perfect – I highly doubt their veg comes from someone’s back garden as is shown in the video – but their focus on the radical grassroots reactions to the corporate control of our food chain is admirable to say the least. This, coupled with their own personal commitments, will hopefully educate some people on current global food issues.”