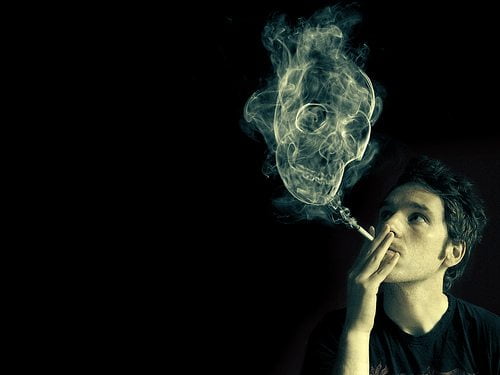 It’s depressing how many wealthy white investors advocate profiting from the deaths of poor and, to not put too fine a point on it, black people. Rich white people profiting from legal but unethical trade involving the poorest nations sounds eerily familiar, doesn’t it?

Regardless of the moral dimensions of profiting from a highly addictive carcinogenic drug, we believe in individual choice in a free society. Everyone has the right to smoke, who is above a certain arbitrarily set age limit. If you are “just having a fag”, we’re cool with that. Conversely, everyone else has a right not to smoke – hence the public smoking ban. Individual freedom need only be curtailed when it infringes another’s freedom.

In the developed world, we have a comprehensive health education system that makes the smoker aware of the risks. We also have a highly efficient health service that can deal with the health effects of smoking, meaning that while many smokers will die horribly painful and slow deaths, we can at least alleviate their suffering. The triple effect of health education, punitive taxes and public smoking has been to reduce smoking in the UK, across Europe and the US.

Nevertheless, the less educated and poorer you are, the more likely it is that you will smoke. The tragedy of domestic smoking is that those least equipped to question the habit or deal with the consequences, are most likely to be addicted to and die from the drug.

The developing world is another matter altogether. Facing bans and an educated consumer base in their home territories, big tobacco has sought out new markets in the developing world where there is no health education or regulation to halt their growth. If your customers keep dying and you’re regulated out of existing markets you need new products (e-cigarettes) or markets (developing world).

As this 1996 article in Oxford Journals’ British Media Bulletin pointed out, “Tobacco consumption is increasing in developing countries, which will bear the brunt of the tobacco epidemic in the 21st century. If current smoking patterns continue, 7 of the world’s 10 million annual deaths from tobacco in 2025 will occur in developing countries.”

The tobacco industry seems to have seen the ‘tobacco consumption is increasing in developing countries’ as a growth strategy recommendation rather than caution.

If children smoke in the developing world, that’s the fault of their dysfunctional and often undemocratic governments, goes the big tobacco argument. We would class this as fail on the question, “Are you a member of the human race?”

Financial adviser Adrian Smith may see a moral maze in ethical investment: “Another highly influential and successful investing strategy over volatile times, has been to invest in defensive tobacco stocks, somewhere that would be off-limits to most ethical investors, and hence the investment dilemma for some of us wanting to ‘do the right thing’, but ultimately trying to safeguard money for our family’s future benefit.”

Smith perpetuates the myth of tobacco stock performance. But, as Martin Dockrell, director of research and policy at anti-smoking chrity ASH told Blue & Green Tomorrow, “Imperial, which has close to half the UK market, have lagged behind the FTSE 100 by around 20%.

“They [Imperial] have been trying to tunnel their way out, only to find that – one after another – the foreign markets they pop up, in acquire similar regulatory challenges.

“Imperial’s fate today is set to face BAT and Phillip Morris tomorrow. The World Health Organisation Framework Convention on Tobacco Control is designed to spread best practice in health policy […] to precisely those developing economies that tobacco companies were hoping to exploit as their next safe haven.”

There’s no maze in tobacco investing. In an interview for Blue & Green Tomorrow’s Guide to Sustainable Investment 2013, former UK Sustainable Investment and Finance Association (UKSIF) chief executive Penny Shepherd, said, “The issue is not about sin stocks; the issue is about death stocks.” Tobacco kills millions of people a year; it is unquestionably a death stock.

Profiting from death can never be described as influential, successful or defensive. Profiting from foreigners who do not have the educational and health service benefits of the developed world is pernicious, cruel and offensive. Ditch the tobacco stocks and invest in companies doing some good (healthcare, for example), which are growing as fast, if not faster than big tobacco.