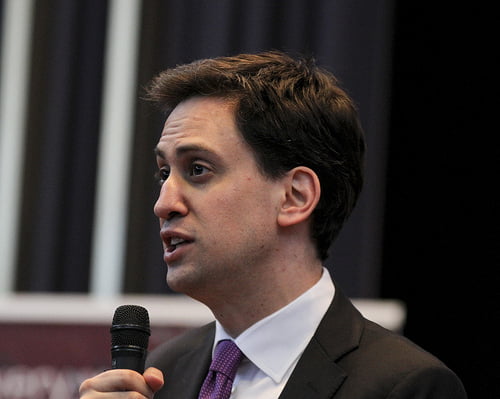 With a 3,330 word speech on Thursday, Ed Miliband managed only one mention of ‘green’ and ‘clean’ but no mentions of renewables, climate or the environment. Faced with the greatest existential threat to our way of life, British politicians remain stubbornly timid about making the case for a genuinely sustainable economy and lag behind public and business opinion.

Miliband’s speech was ostensibly about living standards. He argued that a race to the bottom in terms of salaries and conditions was not a sensible economic strategy. The economic rights and wrongs of his address are for other commentators, except for one thing. The glaring omission of climate change and its critical impact on our economy’s future, and the people who live in it, is a staggering oversight. There is no economic stability without a stable environment.

Each budget and party conference season, we listen to speeches laden with self-serving and narrow patriotism, misinformed statements about society’s ills and dogmatic proposals for economic growth. We never hear enough about the real and immediate action that needs to be undertaken to create a genuinely sustainable economy.

As our recent infographic illustrated, the population overwhelmingly supports a significant expansion in renewable energy.

While mastering solar energy should probably be left to sunnier climes, we can be masters at wind, wave and tidal energy. Micro-generation and small-scale hydro projects on our many rivers would give communities much need investment and cheap energy. Not only could we create energy security but also build a valuable export industry. This would be a huge bonus economically and ecologically.

Insulating and retrofitting energy saving devices to our homes and businesses would be a boost for tradespeople and manual workers; Miliband’s forgotten 50%. This would be a huge bonus economically and ecologically.

Climate change represents a clear and present danger to our economy and society. If you do not believe that is the case then you really need to read more science and a lot less uninformed, unscientific opinion. Especially those who say things like, “It is not my job” to read peer reviewed papers, but instead to be “an interpreter of interpretations”.

It is time for all of our political leaders to make the strongest case for the long-term sustainability of our economy, and rapid action. This means balancing the viability of the planet and the need for greater global prosperity, often crudely and incorrectly measured by GDP.

Miliband makes a compelling argument for a more equal society, which all the evidence points to as being happier, healthier and more at ease with itself, but the triple pillars of sustainability need to be tackled today.

But, our living standards are threatened by climate change more than anything else.

In 1966, Kenneth E Boulding, in Frank F Darling and John P Milton’s Future Environments of North America, wrote the following: “With laissez-faire and price atomic, ecology’s uneconomic, But with another kind of logic economy’s unecologic.”