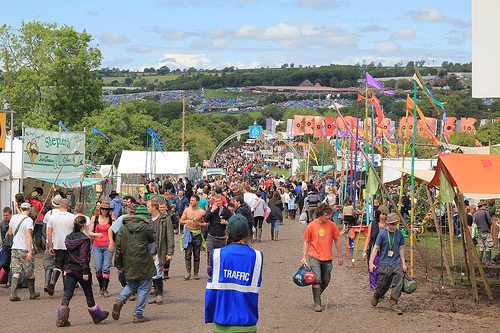 As Glastonbury 2013 gets underway, Francesca Baker reflects on how festivals can inspire a generation of environmentally-aware individuals.

Music playing, beer flowing, away from home, everyone hanging free, sweet songs flowing through the breeze, and a time when everyone is your friend.  Festivals are an opportunity to step away from everyday life and forget worries, when the normal world seems very far away.

Who has the time or indeed inclination to worry about their environmental impact as they harness their inner passions so closely in a field of fun? Except of course a sustainable solution is one that is both always on, and therefore is relatively easy to undertake – even at a festival.

As one of the biggest celebrations of positivity, shouldn’t the 400 plus festivals taking place every year be not only limiting their negative effect on the environment, but indeed having something of a positive one?

A study by the organisation A Greener Festival, run in conjunction with Buckingham New University, found that the majority of people are concerned about the impact of festivals upon the environment. Of course, the name of the organisation suggests some inherent biases, but the fact that 83% of people polled said that they would still go to a very environmentally poor festival if the line-up was strong suggests that the audience polled are representative of the usual music crowd.

A weekend’s worth of fun can do a lot of damage, both at the time and after – and not only to the reveller’s liver. Noise, waste and traffic all have a negative impact not only on the local community, but the wider world.

More than 84,000 tons of carbon are emitted from UK festivals every year. Queues of cars are frustrating for local people, as well as emitting harmful gases. Mounds of rubbish build, not all of it being carefully recycled, or even making it to a bin. All night noise understandably frustrating people living nearby, which consequently affects the relationship a community has with the festival.

Sustainable remedies will look to not only minimise the effect whilst still allowing the festival to thrive, but also harness that festival feeling and allow it to flourish.

However, like so many things, the problem is one of taking responsibility, especially for the average alcohol addled music fan letting loose for the weekend. Ninety per cent of those surveyed believed it was the organisers’ responsibility to minimise any damaging effects that a festival may have, with only 33% believing it to be that of the individual festivalgoer. So with the buck being passed back and forth, who should seize the initiative, and what should those initiatives look like?

Start small. A free cup of tea for bringing the rubbish around your tent to a recycling pen is one of the ways that Bestival and Camp Bestival encourage their audiences to be green. At V Festival, fans are encouraged to collect cans for a reward, and last year around 130,000 were picked up, which equates to over two tonnes of aluminium and steel.

Most festivals also knock 10p off a pint when bringing back a paper cup, which is why you often see people wandering around stacking discarded cups. After a few years of too many abandoned tents, more than 30 festivals have signed up to the Love Your Tent campaign that encourages people to bond with their portable homes in the hope that this will cause them to take their canvas home rather than leave it.

Location is an issue. The majority of events take place in the middle of nowhere, making travel by any means other than car difficult. By organising festival coaches, transport is not only more cost efficient but environmentally efficient. Organisers can also vastly reduce the amount of land needed to serve as car parks, and selling tickets that include transportation, rather than offering it is an additional option, at additional cost, is a simple way that organisers can improve uptake as well as make some extra cash.

Sustainable remedies will look to not only minimise the effect whilst still allowing the festival to thrive, but also harness that festival feeling and allow it to flourish

As a place to spread the message of environmentalism and activism, there are few better forums than festivals. And everyone knows the power of an idol and their action. By asking artists to get involved and do just one thing, the effects are also likely to reap dividends. Addled to the eyeballs on serotonin, most people are more receptive to charities and concerns, and so speaking to people when at the events can represent a valid marketing opportunity.

There are signs of success. In 2011, Lowlands festival ran entirely off solar energy. Meanwhile, ethical bank Triodos helped finance the installation of over 1,100 solar panels on Worthy Farm’s cow shed back in 2010 to help power the UK’s largest festival Glastonbury, although this will never be enough to support the mighty infrastructure that the event requires.

Croissant Neuf is a small family festival entirely run on solar energy, as is Sunrise in Somerset, and one that larger events like Glastonbury, Reading and Leeds, V et al can learn from.

It is only when the major players make it easy for festivalgoers to behave in an environmentally positive way that real effect can be had. And once festivalgoers are convinced, they will behave in a sustainable way whichever festival they are at, if the context allows.

This is where the real solution lies – teaching individuals the ways in which they can behave that will have a less harmful impact, and enabling festivals to provide opportunities to do so. Of course, if the line-up is rubbish, there may be no hope.