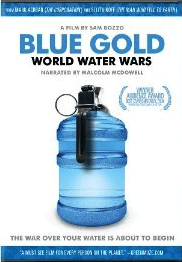 Blue Gold: World Water Wars examines the problems created by the privatisation and commercialisation of the world’s water supplies and asks what this means as the resource dwindles and demand grows.

The film is based on the book titled Blue Gold: The Right to Stop the Corporate Theft of the World’s Water. It argues that in the future, wars will be fought over water supplies because a growing population and increasing demand from the agriculture and industrial sectors will pile pressure on fresh water resources.

Blue Gold states we are using fresh water well beyond the finite supply, resulting in the desertification of the earth. It features interviews with activists, campaign groups and experts in the field to explain the points made and demonstrate the impacts.

Due to privatisation, the film says, corporations now have too much power, as these companies are accountable to their shareholders rather than communities. Corrupt governments are also accused of using water for economic and political gain.

Blue Gold also highlights success stories of activist and makes a case for community action, arguing that we need a political movement from the bottom in order to address the challenges that we face now and in the future.