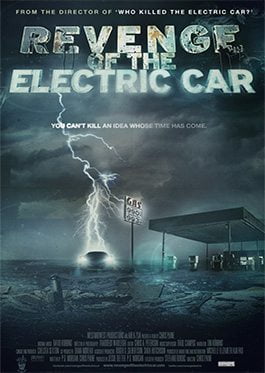 Following on from Who Killed the Electric Car?, Revenge of the Electric Car looks at the electric vehicle industry, the main players in the sector and the challenges of making cars more sustainable.

According to the filmmakers, by 2006 thousands of electric vehicles had been destroyed by the same car companies that had built them. However, just five years later eclectic cars were rising in popularity and mainstream manufacturers were developing models and taking note of public interest.

The film follows the race to create the best electric car and the future of the automobile. It goes behind the scenes at Nissan, General Motors, and Tesla amongst others. Is shows the development of various models.

The film demonstrates the challenges individuals and companies face, allowing viewers to understand and connect with the industry. Revenge of the Electric Car depicts the story in an interesting and different light.

Speaking to Blue & Green Tomorrow when the film was released, filmmaker Chris Paine said, “I hope this film encourages more people to give highway speed plug-in cars a shot whatever their perspective or politics buts there’s incredible pushback to fundamental change, this film is not an argument – it’s a story about momentum to change. We have the intelligence and renewable resources to do much better.”

Related Topics:bookfilmreviewfilmmovieRevenge of the Electric Carreview