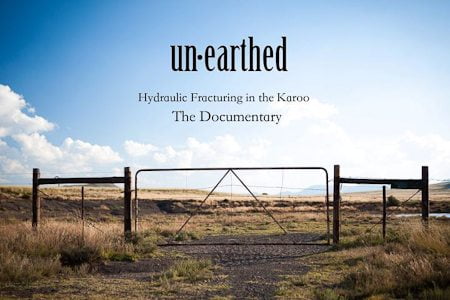 Unearthed investigates the issues that surround the controversial shale gas extraction method fracking, documenting how the process could dramatically impact local communities, economies and the environment. Along the way it attempts to uncover the undesirable costs and realities, acting as a wake-up call for change in the energy industry.

Filmed and directed by South African Jolynn Minnaar, the documentary takes her to the US to discover whether the introduction of fracking can provide a boost in terms of employment and economic activity to the impoverished region of Karoo in South Africa.

During her journey travelling to places like Pennsylvania, she discovers how major corporations in the shale gas industry are negatively impacting communities and the environment, through contamination of air and water sources, fires and placing enormous strains on the health of the locals living around the sites.

Families affected by these sudden and harsh impacts lead a life of despair, with some being forced into poverty and having no clear option but to sign non-disclosure agreements – another tactic for companies to give them the upper-hand and make them seemingly unaccountable for their actions.

Minnaar’s story cuts right into the many causes and implications associated with shale gas extraction, bringing to life personal conversations and meetings with neighbourhoods searching for answers, and who are struggling to cope with the dangers of fracking.

Over the course of the documentary’s filming, hundreds of interviews were conducted with individuals including residents located near fracking sites, scientists, professors and government officials to report and establish the research and scientific evidence base.

Unearthed provides a significant platform for further discussion on the global energy crisis and offers a new perspective on the nature of the fracking debate.

The world premiere of the film was held at the Sheffield Doc Fest on June 10. And on Thursday morning, it was announced that it had been awarded the 2014 Green Award at the festival.