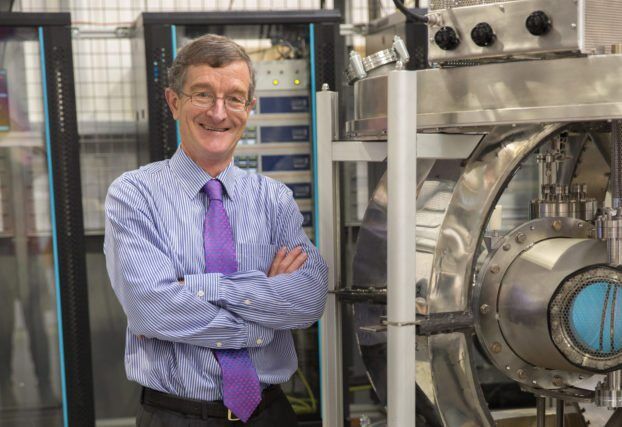 Nuclear fusion is the creative process of the universe. All matter, besides hydrogen and a smattering of helium, was created in the fusion furnaces within stars as small atomic nuclei joined together to make larger ones. This reaction releases huge amounts of energy – about ten million times as much by weight as the chemical reaction of fossils fuels, and all without any harmful byproducts. One can see why it is hailed as the energy of the future, the power source that will right the wrongs of a fossil fuel-reliant past and present. But it is not easy to achieve.

The established principle for this reaction on Earth is to combine deuterium and tritium, two isotopes of hydrogen, to make helium and a neutron. In order to do this, fusion reactors must recreate the conditions found in stars, where fusion naturally occurs. This means creating temperatures of 100m degrees to create a super hot ‘plasma’ within which the isotopes come together. The neutron generated by this reaction is not confined by a fusion reactor and so flies out of the vessel; capturing the energy of the neutron is what generates electricity.

The scientific and engineering problems behind putting a star within a box are big, to say the least. Without proper confinement of the plasma, the reactor walls would get hot and the fusion fuel would get cold; the reaction would stop. The hot plasma must be isolated from the walls of the reactor. This feat can be performed using magnets and the most advanced machine used for this purpose is the ‘tokamak’.

The best-performing tokamak in the world is JET, producing 16MW of fusion power with 24MW input in 1997 – ie 65% as much energy out as was put in. It holds the world record for total fusion power produced and for getting closest to breakeven, the point where you get as much energy out as you put in. For JET to achieve this, fusion research had followed a Moore’s law-like path. The temperature, density and energy confinement time, which indicates fusion performance, was increasing at a faster and faster rate up until the JET experiments.

But since then it seems that progress has stalled. There have still been experiments built and much learned, but progress towards energy breakeven has slowed. We still haven’t actually reached energy breakeven almost 20 years after we nearly got there.

Traditional designs have moved to larger dimensions, culminating in the ITER experiment currently under construction in the south of France. This will be over 30m tall and weigh about 23,000 tonnes. The demonstration reactor that follows, dubbed DEMO, will likely be slightly bigger again. When ITER was being designed in the 1990s, it was believed that the only feasible way to increase fusion power was to increase machine size. But the size and complexity of ITER has led to very slow progress, with first fusion set for the mid 2020s.

Tired of waiting so long and recognising the inherent difficulties of such a big project, the possibility of a smaller way to fusion has grabbed the imagination of inventors, innovators and now investors.

As patience with progress has begun to run out there is a new climate of private funding reaching into areas previously the domain of governments. Ventures like Virgin Galactic and SpaceX, or The Breakthrough Energy Coalition led by Bill Gates and Mark Zuckerberg; these large investments in new technologies and promising areas of scientific research are becoming more common. As Lord Rees of Ludlow, past President of the Royal Society, put it in 2015, “the private sector now has greater appetite for risk in scientific projects than Western governments.”

The fusion industry has benefitted hugely from this surge in funding. Jeff Bezos, founder of Amazon, and Peter Thiel, co-founder of PayPal, have invested many tens of millions into private fusion ventures in the US and Tokamak Energy is seeing the same in the UK, receiving over $15 million so far from private and public investors. This has allowed the complex science and engineering needed for fusion to be developed faster than it has for years.

For Tokamak Energy this investment has allowed it to extend the lead that tokamaks already have in the race to fusion. With research beginning in the mid 20th century, a lot is known about how they hold plasma in a spherical reactor with magnetism. Tokamak Energy has added to this, publishing two papers that show for the first time that size is not an important factor in fusion reactors and proving that a compact reactor can produce an energy gain; a game changer when you consider the grand scale that other fusion projects are pursuing. Proving this has helped Tokamak Energy to turn the pursuit of fusion energy into a series of engineering challenges.

Thanks to funds raised, Tokamak Energy has been tackling these challenges head on with a fivestage, five-reactor plan. Its second device showed it was possible to make new high temperature superconducting magnets for controlling the plasma. These are made of a material with much increased conductivity in high magnetic fields than materials typically used for magnets in fusion reactors. The higher conductivity and higher operating temperature will allow fusion power to be produced in much more compact devices than conventionally thought possible.

By breaking down the challenges into such distinct goals, money can be raised privately to achieve each step, with success enabling more money to be raised to tackle the next challenge. Tokamak Energy aims to deliver a fusion power gain within 5 years, first electricity within 10 years and a 100 MWe power plant within 15 years, but acknowledges that this will depend on attracting a huge amount of investment.

There is latent public enthusiasm; many people recognise that harnessing fusion energy is an important challenge that we have a duty to tackle. The new investment climate brings hope for this fusion future. While some hold the view that fusion will forever be 30 years beyond the horizon, Tokamak Energy is working on making it a reality.